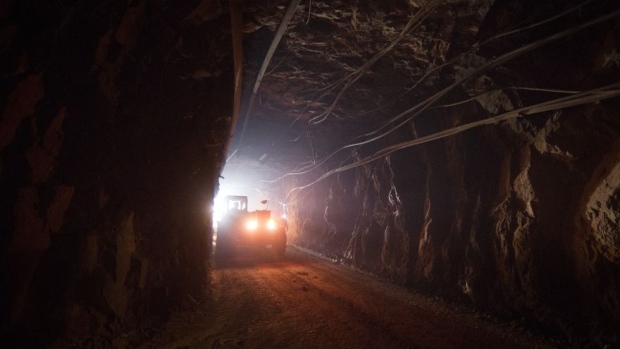 A truck moves through a tunnel to pick up rock ore from the digging floor at the underground gold mine. Bloomberg

Scores of people are still missing after Wednesday’s attack near a Canadian-owned mine in Burkina Faso in which 38 people were killed, the worst such incident in the West African nation struggling to contain an Islamist insurgency.

“Our troops are on the ground because we also have some elements that are missing, some mine workers that we are looking for,” Sy said.

Unidentified gunmen attacked a convoy under military escort transporting workers of Canadian gold miner Semafo Inc. about 40 kilometers (25 miles) from the company’s Boungou mine in the eastern Est region. While the mine was unaffected, operations were suspended out of respect for the victims, Semafo said.

The attack comes as several West African countries are battling Islamist insurgents who are increasingly disrupting business and forcing governments to abandon large swathes of territory. The raids have spread from Sahel countries such as Mali, Niger and Burkina Faso toward the borders with coastal nations, including Ghana and Ivory Coast.

“No country is spared from terrorism,” Senegal President Macky Sall said during a stopover in Ouagadougou following a meeting with the West African regional bloc in Niger’s capital Niamey on Friday. “This time it was workers going to their office who were attacked.”

Semafo’s stock fell 4.9 per cent in Toronto on Thursday and extended its decline by 4.8 per cent on Friday. Shares in Australia’s Perenti Global dropped 12 per cent after the Perth-based mining contractor said 19 members of its workforce were killed in the incident. The Perth-based mining-service provider also suspended operations.

--With assistance from Katarina Hoije.