Brian Porter hasn’t had many moments of vindication during his tumultuous eight years as chief executive officer of Bank of Nova Scotia, Canada’s third-biggest lender. He got a big one last week.

Scotiabank reported quarterly profit that handily beat estimates on Nov. 30, fueling a rally in the shares and prompting analysts to raise their price targets. It was a welcome turnabout for Porter, whose bank has been the worst performer among Canada’s Big Six lenders since he took over in 2013.

Years of work to reposition the bank’s Latin America-focused international unit is “98 per cent done” and the market will see the benefits over the next year, the CEO said in an interview at its Toronto headquarters. The wealth management division, which Porter bulked up by spending heavily on acquisitions, earned more than $1.5 billion (US$1.2 billion) for the first time this year, up 33 per cent from 2019.

“We don’t like how our stock has been trading, but I’ve been around long enough to know that the market is focused on revenue growth, on earnings growth, on dividends -- and we’re focused on all those things,” Porter said. “But we had to go through this adjustment period to get things where we needed to get them.”

The adjustments started shortly after Porter took over. He pulled Scotiabank out of markets such as South Korea, Dubai, Puerto Rico, El Salvador and Thailand, where it was either underperforming or saw little long-term competitive advantage.

Then he expanded in markets where Scotiabank has long thrived, including Mexico, Chile, Peru and Colombia, capping off the changes with a US$2.2 billion deal for control of Banco Bilbao Vizcaya Argentaria SA’s Chilean bank in 2017.

Now, the effect of those changes may be kicking in. The international unit’s profit last quarter was the highest since the pandemic began. Its performance was helped by rising business loan balances in Latin America, where soaring prices for commodities such as copper are spurring more investment. Interest rates are rising faster in the region than in others as policymakers try to ward off inflation, improving Scotiabank’s margins on loans made there, analysts say.

“It does look like the market is starting to warm up to the potential that the international segment has,” Barclays analyst John Aiken said last week. “The problem is that sentiment has been so negative on that for such a long time that it’s going to take some proof in the pudding before investors are really willing to step up.” 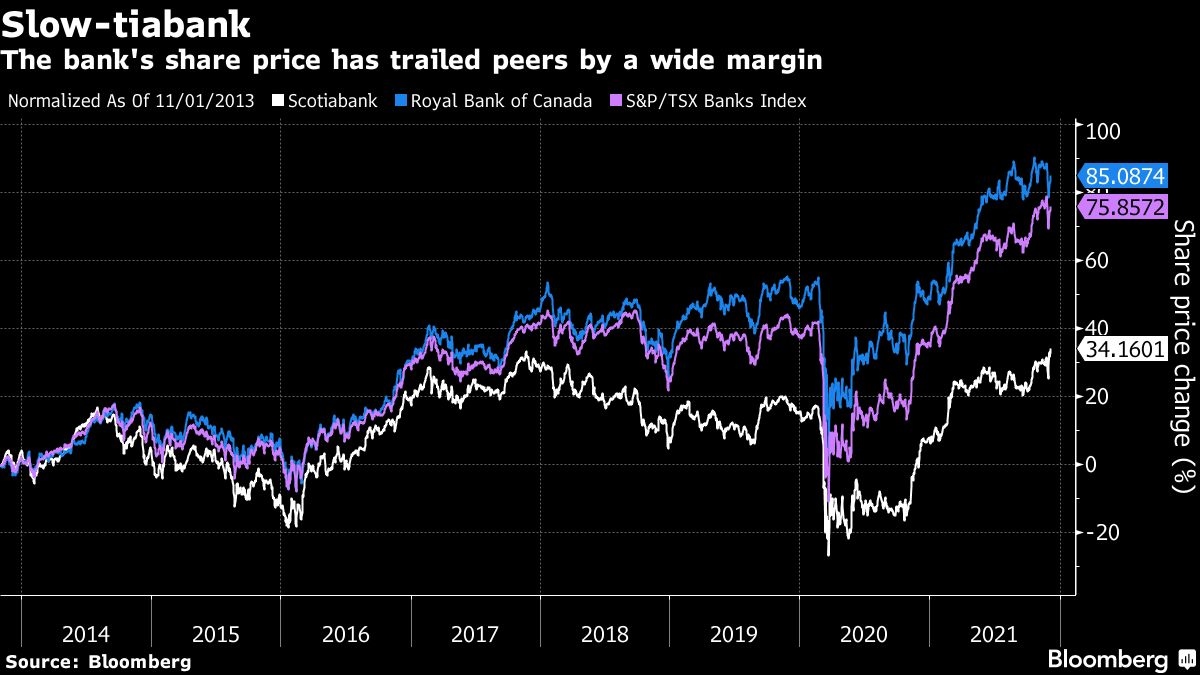 Looming over Scotiabank is the larger debate about whether its Latin American business provides enough growth to warrant the high risk, given the region’s volatile politics that has produced leftist leaders in Mexico, Peru and other countries.

“International only accounts for 20 per cent of their earnings, but it feels like it accounts for 100 per cent of the conversations about them that I have with investors,” Paul Holden, an analyst at Canadian Imperial Bank of Commerce, said. “And probably sometimes Scotia feels that way too.”

Porter says the political concerns are overblown. For example, despite fears that President Andres Manuel Lopez Obrador would take Mexico in a populist direction, he “really hasn’t tinkered with much of the economy,” the Scotiabank CEO said.

Porter sees Latin America’s growing middle class and increasing use of banking services fueling the business there. The combined return on equity from the bank’s retail, wealth and capital markets business in Latin America will reach 15 per cent in “a couple of years,” on par with or better than the returns Scotia’s competitors generate in the U.S., Porter said.

As the only Canadian bank with a significant Latin American presence, “We think we’ve got an enviable platform in these countries that can’t be replicated, frankly,” Porter said.

Another issue that has unsettled some investors during Porter’s tenure is high turnover of top executives. Some of Porter’s own choices, in fact, didn’t last long in their roles.

Porter said he doesn’t believe that Scotiabank’s churn is worse than at any rival bank. He also says he has made a point to try to bring in new talent from outside, after years in which the bank was “basically a closed shop.”

“There’s a war for talent at the senior executive level, and we’ve got to field the best team,” he said. 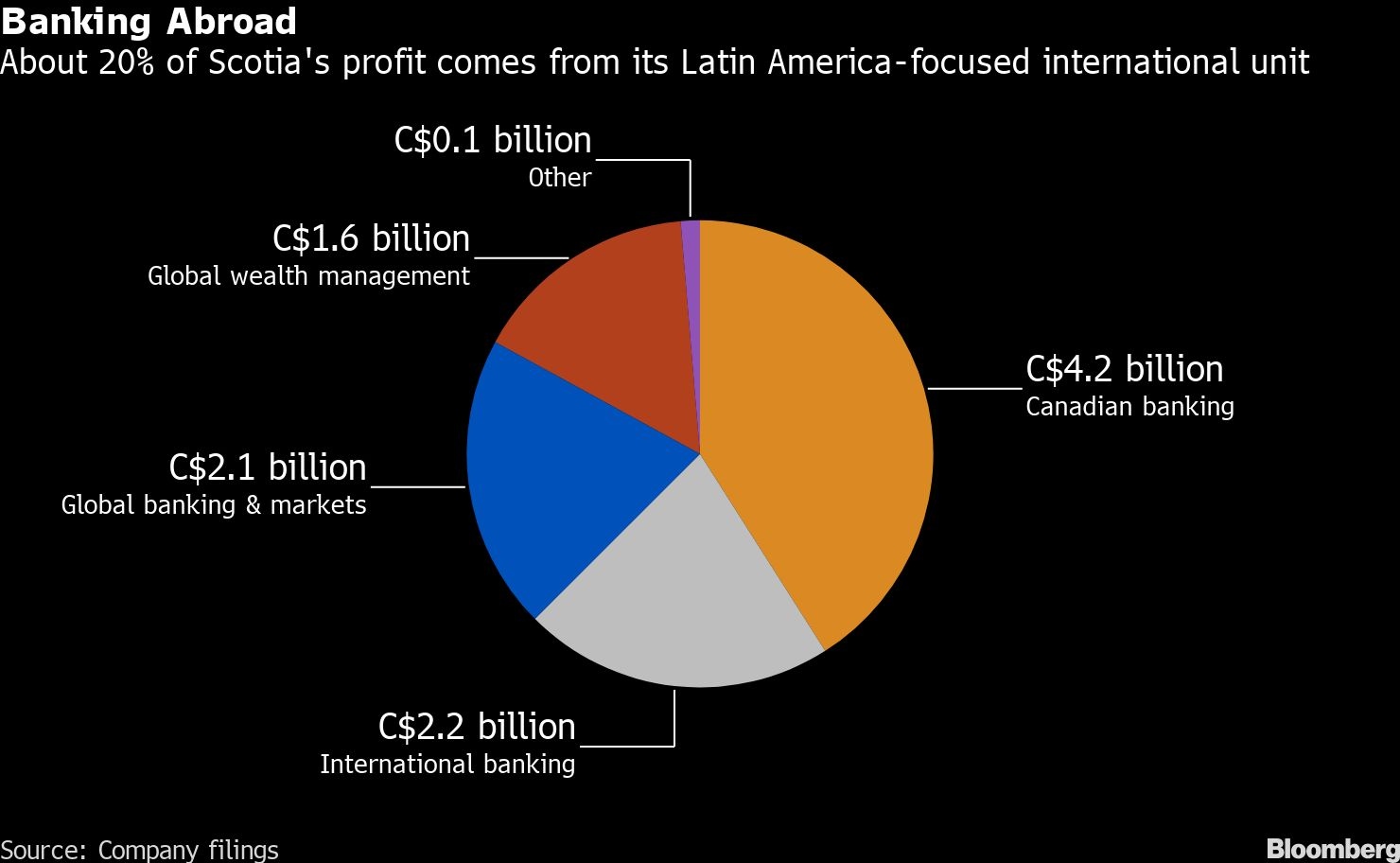 Some of the bank’s problems required more than hiring or firing people. One longstanding weakness was wealth management, a business where rivals such as Royal Bank of Canada have made big gains over a long period. Porter sought to rectify that in 2018 with two deals made within months of each other, buying money managers MD Financial Management and Jarislowsky Fraser Ltd. for a combined $3.5 billion.

Those deals were financed, in part, by issuing shares, and they had the effect of diluting Scotiabank’s return on equity, a key metric for bank investors. But the wealth business now contributes to the bank’s earnings at a rate similar to its Canadian rivals, National Bank of Canada analyst Gabriel Dechaine said.

The acquisitions, coupled with the Latin America revamp, made it difficult for analysts to accurately model the bank’s earnings, contributing to a string of quarterly misses in 2018 and 2019, Dechaine said.

“A lot of the disruption and transformation at Scotia made it hard to evaluate the bank and its growth and its risks,” he said. “But behind all that, there was a key objective of simplifying and concentrating the bank in the areas it wanted to be in. I think that will be good for the bank long-term.”

Porter, 63, declined to discuss how much longer he plans to stay but said that the bank has identified as many as four internal candidates as potential successors. He wouldn’t name them.

After 40 years at Scotiabank, Porter says he still considers banking to be an important calling that has a major effect on communities.

“I don’t think you measure somebody’s success in these roles necessarily on a stock price on a certain date,” Porter said. “A lot of the changes you make in an organization like this will be seen two or three years from now. But I’m very content with my time here at the bank. I’m proud of what we’ve done as a team. And I think that the market will start to reward that over time.”