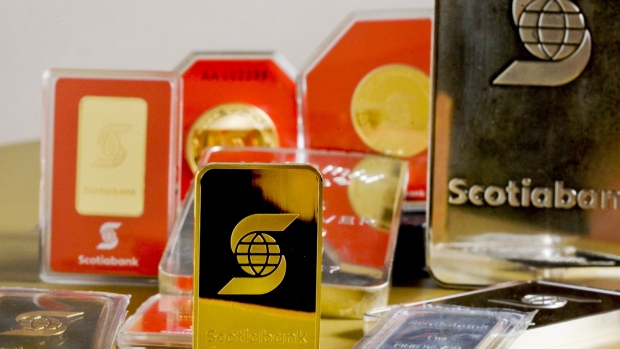 Gold bars on display during the inauguration of the ScotiaMocatta eStore in 2009. Photographer: Norm Betts/Bloomberg , Bloomberg

(Bloomberg) -- ScotiaMocatta is no more, at least in name.

Bank of Nova Scotia is dropping the “Mocatta” moniker from its metals-trading business, shedding the last vestiges of a firm dating back nearly 350 years as the Canadian owner absorbs the platform into its capital-markets division.

It’s an end of an era that began in 1671 when Moses Mocatta opened an account with one of London’s most famous goldsmith bankers, Edward Backwell. Mocatta and his descendants would go on to build what became one of the world’s largest metals-trading businesses and the oldest member of London’s bullion market. The firm has long participated in the London gold auction, where an industry benchmark price is set twice a day.

Scotiabank came onto the scene in 1997 when it bought the Mocatta Bullion and Base Metals unit from Standard Chartered Plc for $26 million and renamed it ScotiaMocatta. The Toronto-based bank gained a business with 180 employees and 10 offices worldwide, including in New York, London, New Delhi, Hong Kong, Shanghai and Singapore.

Scotiabank spent the last year paring ScotiaMocatta by exiting some markets and simplifying products after reviewing the operation for a potential sale. ScotiaMocatta’s website has disappeared, replaced by the main page for the capital-markets division.

The firm’s research reports now carry the Scotiabank name instead of ScotiaMocatta, and the “Metal Matters” monthly report from November was the last to bear the ScotiaMocatta brand. Other references to the storied name are being phased out, though the bank still maintains a web page on ScotiaMocatta’s history.

“Scotiabank conducted a strategic review of our precious and base-metals business and made the decision to integrate the platform more directly into our overall global banking and markets organization in order to more seamlessly offer our broad expertise to our clients,” bank spokeswoman Heather Armstrong said in a statement. “This integration of our metals business, now known as Scotiabank Commodities, is well underway.”

Scotiabank “reaffirmed” a commitment to the global metals business by hiring key people with expertise across precious metals, base metals and energy in recent months, Armstrong said.

Those hires included Steve Scacalossi from Sumitomo Corp. as a managing director in New York, along with commodity strategist Nicky Shiels, analyst Teona Lazashvili, and Elizabeth Scarcello and Amaryllis Gryllaki for sales. The hires came after seven of Scotiabank’s New York-based metals traders and salesmen left to join rival Bank of Montreal in the past four months.

Other changes are in the works. The firm will stop supplying gold to the Italian and Indian jewelry industries, which Scotiabank Chief Executive Officer Brian Porter said this month was “one of the big pieces” of the business.

“We’re virtually out of that business and will be in the next quarter or two,” Porter said at a Jan. 8 banking conference.