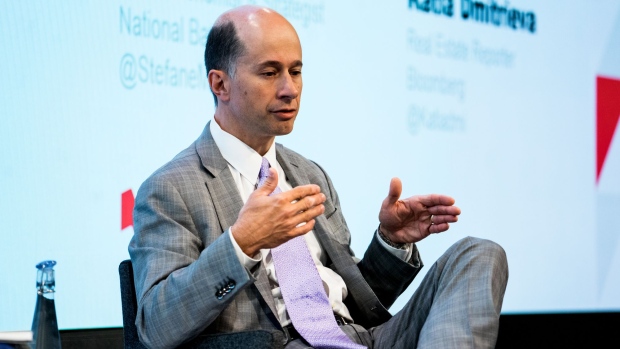 Derek Holt, vice president of the Bank of Nova Scotia (Scotiabank), speaks during the Bloomberg Canadian Fixed Income Conference in New York, U.S., on Tuesday, Sept. 26, 2017. The conference offers an in-depth look at the market for Canadian bonds. , Bloomberg

(Bloomberg) -- A prominent bank economist hurled criticism at Canada’s statistics agency after it revised its economic figures for April and May with little explanation, giving Prime Minister Justin Trudeau’s political opponents an opening to criticize his record.

Statistics Canada said Tuesday that gross domestic product contracted at an annualized rate of 1.1% in the second quarter, missing expectations for a 2.5% expansion in a Bloomberg survey of economists. The data included substantial downward revisions for two months during which large parts of the country were under lockdown to contain Covid-19, but the release failed to include details as to the cause of the changes, which included output reduction in service sectors affected by the pandemic.

“How can a data agency revise GDP growth as much as Statistics Canada just did and say absolutely nothing about it?” Bank of Nova Scotia economist Derek Holt said in note to clients Tuesday.

“There is a fundamental question of judgment at the agency in terms of dropping a sudden revisions bomb in the midst of an election campaign and offering no explanation other than we have more information on the past year-and-a-half.”

The surprise weakness in the economy could have implications for Trudeau’s struggling campaign for re-election. Conservative Leader Erin O’Toole, whose party is in a dead heat with Trudeau’s Liberals in recent polls, used the data to claim the government was putting Canada “further down the road of recession, not the road to recovery.” The election is Sept. 20.

A spokesperson for Statistics Canada declined to comment on Holt’s note.

“This somewhat changes the narrative -- the third wave of infections’ impact on the economy was supposed to have been short-lived and moderate” said Dominique Lapointe, an economist at Laurentian Bank of Canada.

Other economists took a more sanguine view of the Statistics Canada revisions, citing the volatile conditions created by pandemic.

“I do think they should explain in more detail what happened early in Q2 and why their initial estimate missed by so much. I don’t believe there’s anything untoward here,” Doug Porter, chief economist at Bank of Montreal, said by email. “There are so many huge shifts in the economy right now, I do have some sympathy for those trying to track the data.”