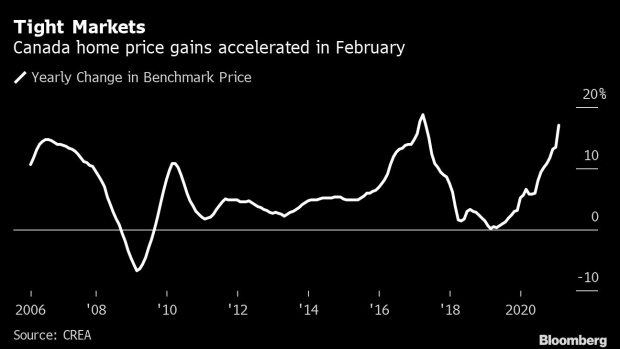 A "For Sale" sign in front of a row of homes in a subdivision in Vaughan, Ontario, Canada, on Thursday, March 11, 2021. The buying, selling and building of homes in Canada takes up a larger share of the economy than it does in any other developed country in the world, according to the Bank of International Settlements, and also soaks up a larger share of investment capital than in any of Canada’s peers. , Bloomberg

In a report released Sunday, Scotiabank’s chief economist Jean-Francois Perrault said the recent run-up in home prices nationally over the past year was in large part driven by sluggish supply that failed to keep up with higher demand -- a trend that could reverse itself as new sellers enter the market in coming weeks. If the government does decide to take action, it should target housing speculators, he said.

“We are hopeful that listings will rise in coming months, Covid-19 lockdowns permitting, and that that will restore a better balance between sales and inventory,” Perrault said in the report. “If that does not occur, some form of action might be required.”

Home prices across the country are being fueled by historically low interest rates that are driving buyers into the market, triggering a debate over whether steps should be taken to curb demand. Some economists have begun urging policy makers to do something, worried about affordability and the risk of a correction. Others, including Toronto-Dominion Bank Chief Executive Officer Bharat Masrani, are arguing that price pressures could abate once the crisis subsides.

In recent reports, both Royal Bank of Canada and Bank of Montreal say the housing market is getting overheated and immediate steps are needed. Among the more controversial tools Trudeau’s government could use would be to impose a capital gains tax on the sale of permanent residences.

“Many Canadians believe the policy environment guarantees property values will rise indefinitely,” Royal Bank economist Robert Hogue said in a March 24 report. “Policymakers should put everything on the table, including sacred cows like the principal residence exemption from capital gains tax.”

Perrault said a capital gains tax shouldn’t be considered because it could represent a “significant financial blow to Canadians.” If anything, regulators should focus on speculative activity, where home buyers are entering the market purely on expectations that prices will continue to rise.

“Speculative activity is the issue of most concern, and any immediate policy actions should be limited to reducing speculation,” Perrault said. The government could, for example, consider taxing sellers who buy a home only to sell it again quickly.