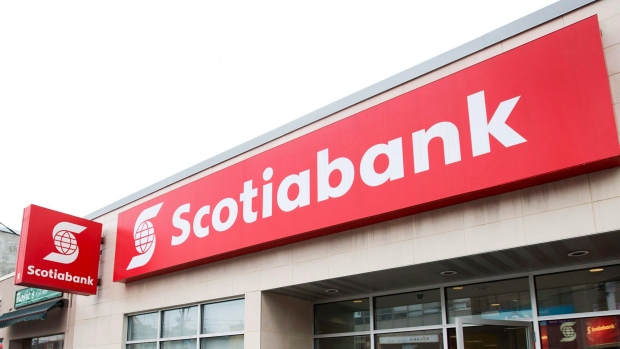 A Scotiabank location in Toronto. , The Canadian Press

Bank of Nova Scotia (BNS.TO), Canada's third-biggest lender, said on Thursday it would spend $1.3 billion over the next three years on technology that will benefit customers as well as lower operating costs and increase profits.

The bank is investing in new digital technologies in response to customers transacting far less in branches and using mobile banking apps much more. It had already announced plans to cut 5 per cent of branches in the next two years.

In a presentation to analysts, Scotiabank said half of its $2.6 billion technology budget for the next three years would be invested in digital technology as it looks to position itself at the forefront of banking innovation.

That will support investment in projects such as new facilities set up to develop technology like blockchain and artificial intelligence.

The bank, which has the biggest international presence of Canada's major lenders, said 45 per cent of the new digital investment will be in Mexico, Peru, Colombia and Chile, which it has identified as its most important overseas markets.

"Our customers want to do more of their banking through digital channels," said Scotiabank Chief Executive Brian Porter. "We intend to be a digital leader in the financial services industry not only here in Canada, but also in our key Pacific alliance markets of Mexico, Peru, Colombia and Chile."

Scotiabank said it had set medium-term targets for at least seven out of 10 of its customers to bank online, at least 50 percent of products to be sold online and less than 10 per cent of transactions to take place in branches.

The majority of the additional efficiency improvements relate to lower operating costs, and progress made so far has increased the bank's confidence in its ability to meet its medium-term financial targets, it said, adding that the changes should contribute to improved profitability in the medium term.

The bank's medium targets are for annual earnings per share growth of 5 per cent to 10 per cent and a return on equity of 14 per cent-plus.