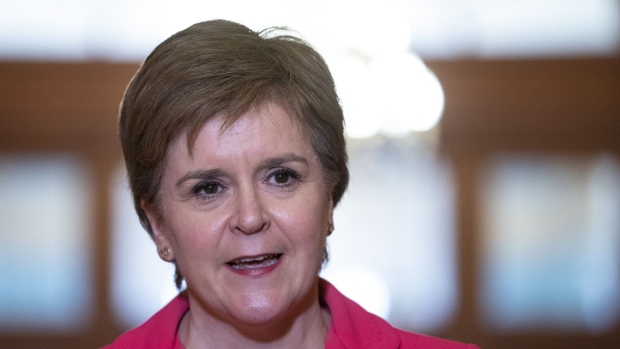 Nicola Sturgeon, Scotland's first minister, speaks at the US Capitol in Washington, D.C., US, on Monday, May 16, 2022. House Democrats are planning to vote on a bill that would prohibit "unconscionably excessive" gas prices if the president declares an energy emergency. , Bloomberg

(Bloomberg) -- Scottish First Minister Nicola Sturgeon said she would push ahead with a referendum on independence next year and accelerate the process of getting the necessary legislation tested in court.

In an address to the Scottish Parliament on Tuesday, Sturgeon said the question on the ballot paper would be the same as in 2014 and the vote would take place on Oct. 19, 2023. The Referendum Bill, though, would first be referred to the UK Supreme Court to ensure it was legal before being voted on by lawmakers, she said.

Sturgeon said she would request permission from the UK government to hold the vote, though Prime Minister Boris Johnson has consistently refused. The next step, she said, is that “the lawfulness must be established by fact and not opinion.”

The move marks a significant escalation in the protracted quarrel between the pro-independence administration in Edinburgh and Johnson’s government in London over whether Scotland has the right to hold another vote on a breakaway after more than three centuries of union.

The electorate backed the Scottish National Party again in elections last year, and Sturgeon says she has a refreshed mandate to seek an independence vote. She also needs to cater to her internal SNP audience, and arguably has little choice but to force the issue.

While polls show Scotland is roughly split down the middle on the issue of independence, many activists in her party have been agitating to call the UK’s bluff and hold a vote regardless of whether London approves one. Johnson and his ministers have repeatedly refused, saying the last one in 2014 was a once-in-a-generation event.