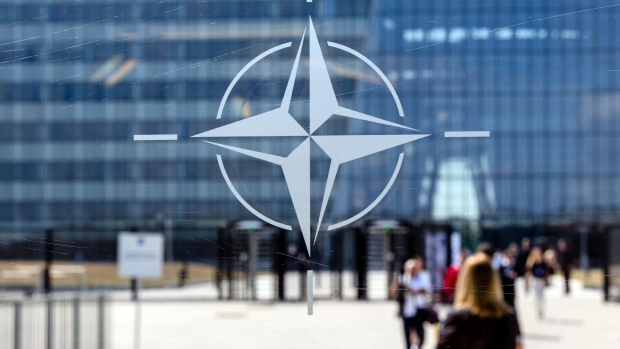 Nicola Sturgeon, left, and Nancy Pelosi, at the US Capitol on May 16. Photographer: Sarah Silbiger/Bloomberg , Bloomberg

(Bloomberg) -- Scotland is committed to rejoining NATO along with the European Union should it gain independence from the UK after Russia’s invasion of Ukraine heightened security risks, First Minister Nicola Sturgeon said.

In a speech in Washington on Monday, the Scottish National Party leader said the war had made membership in the alliance more vital. She pointed to Scotland’s strategic position in the north of Europe and regular approaches by Russian military aircraft and submarines. The SNP, though, retains its policy of seeking the removal of the UK’s nuclear submarine base from Scotland.

Sturgeon said a “strong relationship” with the UK and membership of the EU and NATO would be “cornerstones of an independent Scotland’s security policy.” “There is no doubt that the events of the last three months have strengthened my conviction that this position is absolutely the right and essential one,” the Scottish leader said.

Russian President Vladimir Putin invaded Ukraine in part to halt NATO’s expansion eastward after the government in Kyiv sought to join the alliance. Yet his actions have served to make more countries look at their defense capabilities. Finland and Sweden are now seeking membership of NATO, which is “highly relevant to Scotland,” Sturgeon said.

Sturgeon, who is on a two-day visit to the US, has pledged to hold a second referendum on Scottish independence by the end of next year. At the moment, it’s not clear how that will happen because the vote requires the UK government to grant permission and Prime Minister Boris Johnson has refused.

The last referendum, in 2014, was held after former Prime Minister David Cameron transferred the necessary powers to Edinburgh. Scots voted 55% to 45% to remain in the UK. The electorate is now roughly split down the middle on the question of independence, according to polls.

Before that vote, the SNP reversed its previous policy of seeking NATO withdrawal, though retained its plan to get rid of Britain’s nuclear deterrent from what would be the territory of Europe’s newest nation state.

“We are clearer than ever that membership of NATO would not only be vital to Scotland’s security -- although it would most certainly be that -- it would also be the principal way in which an independent Scotland, in an interdependent world, would contribute to the collective security of our neighbors and allies,” Sturgeon said.