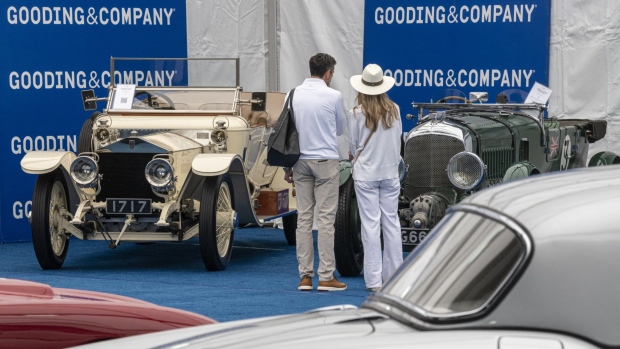 (Bloomberg) -- Last year, Bring a Trailer sold $829 million worth of cars—more than any other auction house in the world.

The feat marked a shift in the collectable vehicle market after a year defined by coronavirus restrictions, pent-up demand, and economic tailwinds. Where such auction houses as Barrett-Jackson, Bonhams, Gooding & Co., Mecum, and RM Sotheby’s had long captured the bulk of the collector-car business, the emergence and proficiency of online auctions from companies like BAT, CollectingCars, and Shiftgate has massively increased the number of cars sold online, in many cases siphoning away cars that would have been offered at live auctions in favor of being sold on the web, and set numerous record-setting online sales throughout.

“The market is a lot bigger than we currently understand it is,” Maarten ten Holder, the managing director for Bonhams Motoring, told a group of collectors, industry insiders, and reporters who had gathered for a panel discussion about the state of car collecting at the Petersen Automotive Museum on Jan. 15 in Los Angeles. “Online is tremendously important.”

Eyes are now on Scottsdale, Ariz., where the annual auction week in the desert, from Jan. 22-30, is expected to demonstrate just how much of the auction houses’ lunch has been eaten by the online upstarts.

“I'm just beyond curious about the results,” says Matthew Katz, a prominent collector in Los Angeles who counts a Maserati MC12, Mercedes-Benz 300SL and Ferrari F40 among his prizes. “Prices are beyond stupid.” For his part, Katz will not attend the Scottsdale auctions, even though he has attended plenty of auctions in the past. The geographic fluidity of the online auction system means that collectors like Katz can satisfy their perpetual desire to find a fresh toy without having to travel to—or wait for—in-person events.

Deals in the Desert

RM Sothebys, Bonhams, and Barrett-Jackson will hold live auctions under the tents in Scottsdale, as in previous years, but the number of lots and sale days are reduced from previous years. Of the three, only Barrett-Jackson will hold live auctions on multiple days. For its part, Gooding & Co. will host a sale labeled “Geared Online Scottsdale Edition,” which will be exclusively online, with no physical presence. This will be its sole sale during the week.

The mixed approach reflects sustained effort on the part of auction houses to adapt to the times.

“Our business has certainly changed a lot in the past five, six years or so, with the online auctions arriving and more recently, with the pandemic,” says Jakob Greisen, vice president and head of Bonhams US Motoring Department. “We have had to regroup and change our format a bit, but we are back with a traditional live format, and I believe there is room for that alongside online auctions.”

This year in Scottsdale, Bonhams will have hand sanitizer in place on site, Greisen says, and has been creating more video and digital assets to augment the cars for sale—such things as history file scans, walk-around videos, and Facetime consultations with specialists, “so that bidders can feel comfortable bidding from home as well" via telephone or online.

Phillip Toledano, who has earned a wide online following for his obsession with owning automotive oddities like the Maserati Shamal and Lancia Delta S4, will not attend any events in Scottsdale, though he is actively looking to buy something new. He doesn’t see the need to go.

“I trust the online sales far more [than live auctions],” Toledano says. “When the hordes weigh in in the comments section online, you get a far more exact sense about a car, compared to just seeing it roll across an auction block.”

Elsewhere, Peter Brotman and Steven Serio, two longtime moguls in the car-buying and -selling business, are also passing on Arizona for the first time in decades. They will be enjoying an invite-only drive for vintage car high-rollers in North Carolina.

“Arizona is changing,” Serio says. “The European car buyers and the high-end guys that liked to go are like, ‘Meh,”  he explains, referring to a general lack of excitement. “And my own personal business is not hanging around an auction tent any more.”

Which is not to say they and others like them will not be following the Scottsdale sales from afar. Live auctions still hold an important place for showcasing cars that belong to people liquidating a collection, such as the Tenenbaum Collection that RM Sotheby’s is selling this year in Arizona.

“RM and Gooding are needed to help sell big collections, either privately or in special sales,” says Serio, since they have the considerable resources—human and otherwise—required to vet, process, transport, and market a large package of significant vehicles. “They do that very well, and that won’t change.”

Notable cars to watch at the Bonhams sale include an exceedingly rare 1902 Darracq two-seat Voiturette with 9 horsepower (high estimate: $65,000) and—on the other end of the power spectrum—a 1997 Porsche 911 with 424 bhp and a high estimate of $320,000. (The latter, a “993,” Turbo S, makes an argument that not every sellable Porsche has gone to Bring a Trailer or to Porsche's own proprietary online selling platform … yet.)

A 1949 Buick  Roadmaster Convertible will be in the center spotlight at the Bonhams sale on Jan. 27. It appeared in the movie Rain Man with Dustin Hoffman and Tom Cruise and is offered directly from the ownership of Hoffman, who acquired the car after filming wrapped. It has an estimate of $150,000 to $250,000.

Meanwhile, auction house executives are clawing for more share in the market with a multipronged approach. They are working to prove to collectors just how critical are their deep institutional expertise and client relationships built over decades, in contrast to the more anonymous web companies that sell cars as if they are low-end commodities.

“What we are bringing is a company that has been around 250 years, with the specialists who know the market,” ten Holder says.

They are also emphasizing the ease and utility of their white-gloved full-service approach, with its extreme attention to details, provenance, racing history, and period-correct colors, mechanics, and components. That’s an attractive scenario for sellers who do not or cannot afford the time required to provide the extensive photographs, background history, and transportation logistics for a given vehicle.

“With just a signature [from the consigner], we do the research, we do the photography, we ship the car, we detail it, we do everything,” Greisen says. “This is more of a one-stop shop.”

Those services must come with a fee that has traditionally added up to a 20% profit for the auction house, split between the buyer and seller. Those who sell online must provide much of that themselves, down to the photography, or pay a higher listing fee. To list a car on Bring a Trailer costs $99; buyers’ fees top out at $5,000, regardless of the sale price of the vehicle.

It is also true that live auctions are fun. Online auctions lack the raw energy and spectacle of any premier live auction, which comes complete with Champagne swirling, bright lights, ladies in cocktail dresses or furs, and an energetic auctioneer who whips the crowd into a frenzy. That’s why the annual sales in such glamorous places as Carmel, Calif., Amelia Island, Fla., and Lake Como, Italy, retain such pull for many collectors, says Brian Rabold, the vice president of automotive intelligence for Hagerty. For these annual live sales, it’s a see-and-be-seen kind of scene.

“The major live auctions benefit from the atmosphere of concours such as Amelia Island and Pebble Beach, and that environment is hard to replicate online,” says Rabold.

Randy Nonnenberg, the co-founder of Bring a Trailer, agrees. “I think the big auctions will always have a business,” he says. “They put on a big show.”

But even the oldest auction houses are admitting they have to work to stay up with the times. RM Sotheby’s, Gooding, Bonhams, and Barrett-Jackson, among others, have all used web-only sales to augment—and in the darkest days of Covid-19, temporarily replace—live sales. On Jan. 15, Bonhams launched an online-only portion of the business called Bonhams Market. “Online gives us an additional tool, an additional portal,” ten Holder says.

Bruce Meyer, a figurehead in the Southern California car world known for owning racing Ferraris, rare hotrods, and early Porsches—and owning a big chunk of real estate on Rodeo Drive—remains sanguine about the emergence of online sales, calling them good for the industry at large.

“A lot of companies are getting on board with online sales, as they should be,” said Meyer during the panel at the Peterson Museum. In 2019, he bought a 1935 Bugatti Type 57 online. At 80, he is old enough to have a long-range perspective on the new shape of the collecting scene.

“Is this the new normal? It seems to be,” he said. “At the end of the day, honest representation will win the business.”