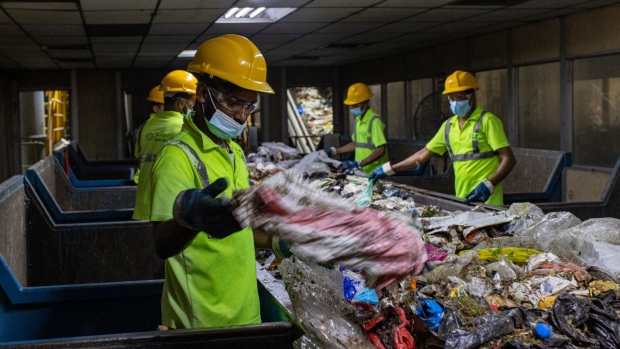 Workers sort solid waste material in the material recovery facility at the Bee'ah waste management complex in Sharjah, United Arab Emirates, on Tuesday, July 13, 2021. The U.A.E. is building one of the world’s largest waste-to-energy plants to deal with its growing trash load as the Persian Gulf state has few options to stop the giant heaps of plastic, paper and organic waste on the outskirts of its desert cities from piling higher. , Bloomberg

(Bloomberg) -- Beeah, a government-backed holding company in the United Arab Emirates, will make acquisitions this year to expand businesses including waste management and technology, according to its head.

“We are working on some deals right now for Beeah to acquire some companies,” Chief Executive Officer Khaled Al Huraimel said in an interview, declining to specify how much it aims to spend. “Our intention is to grow and scale up.”

Beeah, which means “environment” in Arabic, is also developing businesses in health care and digitalization, opening a data center and expanding technology services.

Sharjah-based Beeah recently adopted a holding company structure, which will make it easier to sell or spin off businesses in the future -- though there’s no imminent plan to do so now, Al Huraimel said.

The UAE, a Persian Gulf oil producer, is working to develop homegrown businesses and expand into industries like technology to create jobs and lessen reliance on hydrocarbon sales for income. Abu Dhabi and Dubai, the largest emirates, have pushed government-owned companies to tap debt markets, spin off assets, list companies on local exchanges and forge partnerships to help attract capital.

Over the next few months, Beeah and partner Masdar, Abu Dhabi’s government-owned renewables company, will start a waste-to-energy plant that will generate 30 megawatts of power from refuse at a land fill in Sharjah, the emirate next to Dubai.

The company, which is also moving into a Zaha Hadid Architects-designed headquarters adjacent to the land fill, will focus on expanding its waste management business in Saudi Arabia and Egypt in the next two years before moving into other countries, Al Huraimel said.

The UAE is working to cut some of the world’s highest per capita emissions and reduce the amount of waste headed for land fills.

The UAE became the first major Middle Eastern oil producer to declare a net zero target for its domestic emissions, even though that aim doesn’t cover crude once it has been shipped from the country.

Beeah’s waste-to-energy plant will achieve Sharjah’s aim of eliminating the need to dispose of waste in the landfill. Since it won’t be needed, Beeah and Masdar are partnering to build a 130 megawatt solar plant on top of the landfill.

Beeah’s waste-to-power plant is the first of its kind in the country, with Dubai also building a similar facility. Beeah is also planning what it says will be the region’s first plant to make hydrogen from gasified refuse.