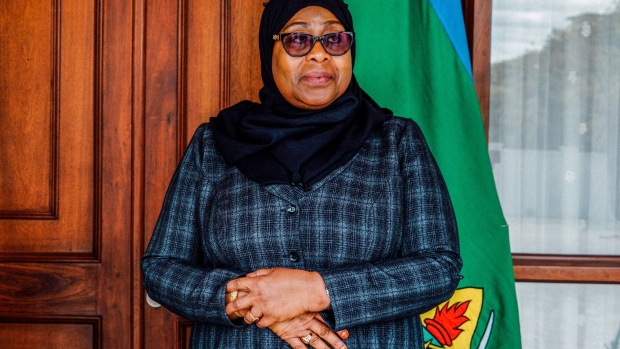 Samia Suluhu Hassan, Tanzania's president, during an interview at State House in Dodoma, Tanzania, on Monday, March 28, 2022. Tanzania expects investments in its liquefied natural gas project to rise by a third to $40 billion just as the world rushes for new sources of the fuel to reduce reliance on Russian energy. , Bloomberg

(Bloomberg) -- Tanzania expects investments in its liquefied natural gas project to rise by $10 billion as the world rushes for new sources of the fuel to reduce reliance on Russian energy.

The second phase of negotiations with a group of companies led by Equinor ASA and Shell Plc for building the long-delayed LNG terminal are expected to conclude by June, President Samia Suluhu Hassan said in an interview in her office on Monday. Hassan revived the talks for the project initially estimated at $30 billion last year after they stalled under former President John Magufuli.

“The world needs it,” Hassan, 62, said at the Chamwino State House in the nation’s capital of Dodoma, referring to Tanzania’s plan to raise production targets of the fuel. Hassan, who was vice president under Magufuli, took over as president on March 19, 2021 after he died in office.

Hassan needs to accelerate the liquefied natural gas project -- the country has an estimated 57 trillion cubic feet of gas reserves  -- for her nation to benefit from Europe’s rush to diversify its energy sources. Tanzania, home to tourist attractions including Mount Kilimanjaro and the Serengeti nature reserve, is also seeking to lure investors in new industries by amending laws, working on getting a credit rating and easing rules for doing business as it seeks to accelerate economic growth to 7% in the long term.

Russia’s attack on Ukraine has given the project fresh impetus as Europe seeks to find new energy sources to starve Russia of funds to fuel the war. In neighboring Mozambique, which has huge deposits of hydrocarbons, the government is receiving interest from companies in its latest auction round for oil and gas exploration blocks.

Tanzania may allow a deal for the LNG project to produce 15 million tons a year, 50% higher than the government’s earlier preference, people with knowledge of the matter said, asking not be identified before a public announcement. That may reduce the project’s lifetime from the initial estimate of 30 years.

“We are not against the higher production because we know the market is there,” Hassan said.

Just two years ago investors were fleeing. During the six years of Magufuli’s rule, privately-backed infrastructure projects stalled and the government clamped down on opposition leaders and the media. Magufuli even denied the existence of Covid-19 in his country. Nicknamed the “Bulldozer,” for bluntly speaking his mind and his uncompromising stance on corruption, Magufuli’s reign saw Tanzania slip 10 notches in the World Bank’s Ease of Doing Business rankings to 141 out of 190 countries in 2020.

The situation worsened in 2017. That’s when three new laws were passed. Under the new rules the National Assembly could scrutinize contracts deemed “unconscionable,” Mark Henstridge, chief executive officer of Oxford Policy Management wrote in a report in 2020. Even a clause subjecting a deal to the jurisdiction of an international arbitration body might be deemed unconscionable, according to Henstridge.

Equinor in 2021 said it was taking a $982 million charge after failing to settle fiscal and commercial terms with the Tanzanian government.

Hassan, who studied at institutions including the University of Manchester, is managing to lure investors back. Registration of new companies doubled to 257 last year from 2020, she said. The government is amending the 2017 laws as “investors are complaining,” she said.

“Embracing the private sector is our major priority,” Hassan -- Africa’s only female head of government who’s often referred to as Mama -- said. “It’s only the private sector which” can bring foreign direct investment and create jobs, she said.

Tanzania earlier this year hired U.S. law firm Baker Botts LLP as an adviser to help conclude talks with international oil companies. Discussions for an LNG plant have been taking place since November in Arusha, the gateway to Tanzania’s tourist highlights of Kilimanjaro, Serengeti and the Ngorongoro Crater.

“The thing that impressed me the most is this momentum that the country is gaining,” Jose Moran, managing director of Tanzania Breweries Ltd., a unit of Anheuser-Busch InBev NV and the nation’s biggest company by market value, said in an interview. “When the private sector and the investors believe in the sustainability of the political system, it’s positive, because then people are willing to put more money in the economy, are willing to hire more people, are willing to grow their business.”

The LNG project will be Tanzania’s biggest investment. Still, the earliest the country will be able to ship the gas will be 2030 if there are no further delays.

While interest in Tanzanian gas was renewed before the war, “with changing landscape of global energy setup and with countries keen on diversifying their supply sources, Tanzanian LNG project chances have increased,” Energy Minister January Makamba said in an earlier interview. “We don’t want to appear like war profiteers, but the project in its own right was competitive.”

More from the interview with Hassan:

“We are doing credit rating but not for Eurobond. We are now in discussion to finalize the rating. That will give the Tanzanian outlook to the investors.”

“We have huge deposits in Liganga. We had Chinese who wanted to extract it but the terms were not very favorable on our side.

We are working on providing necessary infrastructure like the railway from the deposit to the harbor. Power plant and power transmission to the deposits.”

“We found that the agreement wasn’t in favor on our side, so we had to restart the negotiations. We are still negotiating but you know the project is attracting much more investors.

Whoever has better terms for us, we will engage them. We want to start working on it at the soonest because we want to decongest Dar es Salaam Port. We want Bagamoyo to handle bigger vessels and Dar es salaam Port to handle the middle size vessels.”

“Africans are only absorbing the carbon emission which is being emitted.”

Developed nations “are asking us to do the reforestation so that Africa manages to absorb the emissions. But we have asked them for support in doing that; mitigation and adaptation.

But the promises are empty ones. Cop26 has shown a little bit of flexibility and maybe funds might be released. But Africa should have its own program, to have its own funding. The African continent has to develop its own climate resilience program and have its own funding, although the bigger countries might contribute to the fund.”