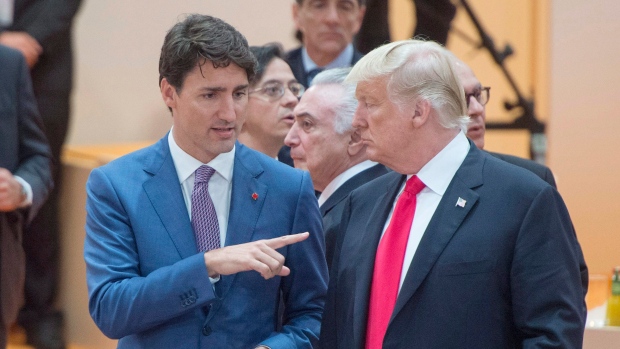 American negotiators may run into Canada’s red line almost immediately when the three members of the North American Free Trade Agreement (NAFTA) meet in Washington D.C. on Wednesday. Core among the objectives laid out by U.S. Trade Representative Robert Lighthizer is to eliminate the so-called “Chapter 19” dispute settlement mechanism, a clear non-starter with Canadian officials.

Prime Minister Justin Trudeau and Canada’s Ambassador to the United States David MacNaughton have been among the chorus of voices who say a fair dispute resolution system is essential to any free trade agreement. If U.S. officials insist on pushing the envelope on the issue, it’s entirely possible it could stall negotiations and drag out a process U.S. President Donald Trump wants to see expedited.

There’s ample precedent such a scenario could unfold: the dispute-settlement provision was key to consummating the original Canada-U.S. Free Trade Agreement inked in 1987.  Canadian negotiators walked out of the talks when it appeared the Americans would not acquiesce on such a measure and returned only when it was included in the pact. The dispute-resolution agreement reached in those talks eventually formed the framework for Chapter 19 when NAFTA was established.

Under Chapter 19, trade spats are heard before a binational panel, as opposed to running through the court systems of either the complainant or the defendant. The dispute panel has repeatedly ruled in Canada’s favour throughout the life of the agreement, most notably on the contentious softwood lumber file. Critics of the current system argue the panel infringes on U.S. sovereignty and  is unconstitutional.

If the current system is scrapped, and no replacement dispute resolution system adopted, the implications could be dire. Part of why Canadian officials insisted on the mechanism 30 years ago was fears the U.S. judicial system, which would be the logical arbiter in the absence of an agreed-upon panel, would routinely rule in favour of American interests in any trade dispute.

The financial and economic stakes are high for all three countries if Lighthizer and company succeed. If Chapter 19 is removed, many fear Trump’s protectionist bent could lead to an increase in duties imposed on Canada and Mexico. Those countries would almost certainly retaliate which could lead to a reduction in trade. That could lead to a rise in consumer product prices, crimping discretionary spending and kicking yet another leg out from economic growth.

The Peterson Institute notes the number of countervailing and anti-dumping duties NAFTA members have imposed on one-another have fallen precipitously since the pact went into effect in 1994. Last year, only 0.1 per cent of the goods Canada imported from the other two members of the agreement were subject to anti-dumping or countervailing duties.

Furthermore, the Peterson Institute notes the bloc has in fact protected the economic interests of the continent against emerging markets over the life of NAFTA. According to the think tank, Canada and the U.S. have imposed duties against China, among other nations, in lockstep over the course of the deal, helping to protect not only their domestic industries, but that of their partner as well.

If indeed talks grind to a halt and the three parties walk away from the table, the U.S. would be left with two options. It could either abandon the efforts to put an end to the resolution process, or make good on Trump’s promise to extricate the United States from the agreement altogether, while Canada and Mexico soldier forward with the agreement in its current form.