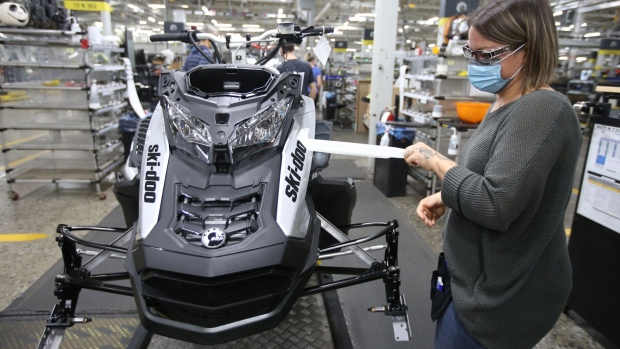 The virus brought BRP Inc. an unexpected windfall, with throngs of first-time customers riding out the pandemic on Sea-Doos, snowmobiles and all-terrain vehicles. It’s betting that greener machines can help sustain the growth.

The Canadian powersports manufacturer plans to introduce a broad lineup of electric-powered products within the next three years, Chief Executive Officer Jose Boisjoli said in a video interview with Bloomberg News. The move is critical to expanding the company’s appeal to climate-conscious consumers.

“It’s not a question of if electrification will happen in powersports, it’s a question of when,” Boisjoli said. “Since COVID, we’re having the question a lot.”

BRP is part of a group of manufacturers that have benefited from a run on leisure goods fit for having fun while socially distancing, like pools and campers and watercraft. Shares of companies such as Pool Corp., Winnebago Industries Inc. and BRP rival Polaris Inc. have doubled or more since bottoming out last spring.

BRP’s U.S. shares closed Thursday 33 per cent higher than a year ago and 389 per cent above their pandemic low in March. Replenishing depleted inventories will lift industry revenue for a while, but analysts wonder what will happen to demand when the pandemic is over, economies reopen and other recreational opportunities are available.

In several surveys last year, BRP found that about one-third of its buyers were new to the industry. The number is usually 20 per cent, Boisjoli said.

“We have a surge of new customers that we never dreamed of,” he said. “We see that as an opportunity, as a positive thing. And right now we are focusing a lot to talk to new customers to make sure we make them lifetime customers.”

BRP is based in Valcourt, the Quebec town where Joseph-Armand Bombardier started building snowmobiles in the 1930s. It was sold by Bombardier Inc. in 2003, went public in 2013 and has a market value of US$5.9 billion, far surpassing its former parent. Bain Capital, one of the 2003 buyers, still owned a 20 per cent stake as of a regulatory filing last April.

One relatively new BRP initiative is focused on attracting more women to an industry that still caters primarily to male consumers.

It’s gained traction with its three-wheel vehicles, which are more stable and easier to drive than motorcycles and sold under the Can-Am brand. One in three buyers is a woman, the company says.

Now the company is trying to foster a community of female users, with a dedicated Can-Am mentorship program that debuted last year. In a private Facebook group with about 7,000 members, women can ask questions, share tips and suggest rides.

The electric vehicle strategy is also aimed at appealing to another demographic that’s outside of BRP’s traditional base -- city-dwellers. When presenting prototypes in 2019, the company included two electric models of two-wheelers, targeting urban residents. Electric vehicles accounted for 30 per cent of two-wheeler sales in the world in 2019, a share that’s set to grow to 77 per cent in 2040, according to research by BloombergNEF.

The electric two-wheeler market is concentrated in China but demand is picking up elsewhere Asia, offering opportunities for new entrants, said Nick Albanese, who heads the intelligent mobility research team for BloombergNEF. In the much-smaller North American market, selling products through moped-sharing companies like Revel Transit Inc. is one option for manufacturers, he said.

BRP will ultimately offer an electric alternative for its entire fleet of products, Boisjoli said. And it’s learning from its past mistakes.

For example, making a battery-powered product with enough range on a large scale, at the right price, isn’t easy. BRP experienced it first-hand when it failed to find enough buyers for an electric version of a side-by-side vehicle released a decade ago, in spite of price cuts.

This time, after exploring an alliance with an Asia-based company, it decided to develop the entire technology on its own, giving it more control of costs, Boisjoli said. The company plans to double the size of its dedicated EV team by the end of the year, a goal that’s complicated by the pandemic, which has stalled immigration.

Still, “we’ve evolved through our history from one technology to the other,” he said. “It will be a natural evolution to go from combustion engine to electrification.”