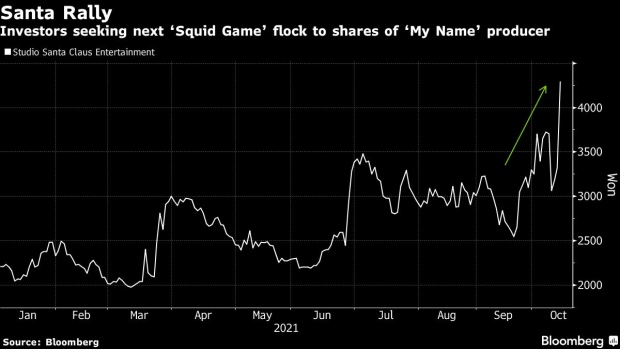 (Bloomberg) -- A tiny production company named for Father Christmas is the latest beneficiary of a rally in Korean entertainment stocks, as investors scour Netflix Inc. hits for trading ideas following the success of ‘Squid Game’.

Seoul-based Studio Santa Claus Entertainment Co. surged by its 30% daily limit after its ‘My Name’ series ranked No. 4 among Netflix TV shows as of Sunday, just two days after its release, according to streaming ratings firm FlixPatrol. Squid Game, Netflix’s biggest series launch ever, remains the top-ranked show globally.

Netflix estimates that ‘Squid Game,’ a Korean survival-game drama, will create almost $900 million in value, showing how much one megahit can generate in the streaming era. The series has helped propel the U.S. streaming giant’s shares to a record high as well as sparking rallies in a number of Korean entertainment names.

‘My Name’ is an eight-episode crime thriller following a woman seeking to avenge her father’s murder. The show’s popularity helped drive Studio Santa Claus to a market value of about $135 million, with trading volume on Monday more than 25 times the three-month daily average.

Among other stocks riding the recent boom in Korean film and TV stocks, Astory Co., the firm behind the Netflix period zombie thriller series “Kingdom,” climbed as much as 15% Monday. Dexter Studios Co. and Jcontentree Corp. each jumped by more than 10%.

ShowBox Corp., whose predecessor had invested in ‘Squid Game’ producer Siren Pictures, and Studio Dragon Corp., whose ‘Hometown Cha-Cha-Cha’ series is currently ranked No. 7 on Netflix, each rose more than 4%.