Portfolio positioning in a wild market

A month into a rout that has lopped off about a third from Canadian stocks, money managers are gingerly stepping back into the market in the hope that a four-year low is the bottom.

Wild swings in the U.S. and Canada have triggered market-wide circuit breakers three times, with trading volume reaching a record high north of the border. Liquidity has vanished in many global markets, a bond rout is now underway and the Canadian dollar has plunged below 70 U.S. cents.

Strategists, ensconced in home offices, are in the dark about what will happen to corporate earnings as authorities around the world shut down economic activity to avert a humanitarian disaster. Volatility on the TSX is at a record, and traders are on the lookout for evidence the outbreak is under control. 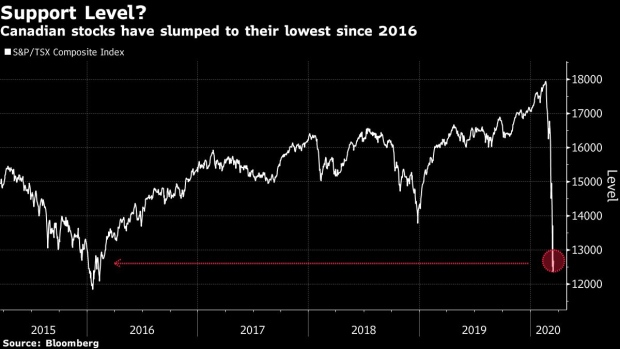 In the meantime, investors are assessing government rescue plans, including Prime Minister Justin Trudeau’s $82 billion (US$56.7 billion) package rolled out Wednesday that’s worth 3 per cent of GDP.

Here are some of their views:

The S&P/TSX composite index has slumped to levels not since 2016, when the price of oil bottomed out. The market was about 1 per cent away from that as of noon on Wednesday.

“The 2016 low is a key support level and one we are watching right now. This is an important technical support level that we would expect to hold. Given valuation, the current market environment is very similar to 2014-16 not only within the energy sector but financials and other areas of the market.”

“In 2016 there were many great opportunities for investors based on valuation and dividend yields. This environment is very reminiscent of that.”

“I am as close to the markets now as when I am in the office. The only challenge sometimes is finding a quiet place to work or take a call, as my wife and kids are home too. It’s cozy to say the least.”

“When I am talking to the traders, I’m focused on ETFs, it’s because that’s where the volume is and that’s where the biggest volatility has been. But at least it’s tradeable and those ETFs are primarily in the U.S. and that’s what I have been recommending people invest.” He pointed to the SPDR S&P 500 ETF and Invesco QQQ Trust Series 1 ETF as examples of liquid ETFs.

He recommends Canadian investors continue buying U.S. dollars and luxury goods providers with global supply chains, such as Burberry Group Plc and Canada Goose Holdings Inc. The return of Chinese shoppers to glitzy malls and boutiques will help boost demand for these types of companies, he said.

Energy stocks now have smaller weighting on the Canadian benchmark than they did four years ago, Prince said. If the slide falls below the 2016 level, “it’ll mean that defaults are accelerating in this country. And to me, that’s the scary part,” he said.

“We are going to be in a period of prolonged low interest rates and people still need income. Whether that income is going to come from dividend equities or alternative sources, I think that’s going to be apparent,” Taylor said in a phone interview from his home. “Companies that have good dividend payouts, that look pretty stable right now, I think those are going to be areas that could be really attractive investments for the next little while.”

“We’ve been telling people, those who’ve got some extra cash on the sidelines, it’s probably not a bad time to start putting some of it to work.”

Too Late to Sell

Murray Wealth is “hunkering down” and “using the opportunity to upgrade our portfolio.” It’s “too late to sell” and the market turning is more of a medical question to do with the spread of the virus, he said.

“Most of the downside is behind us,” he said -- be there still may be more.