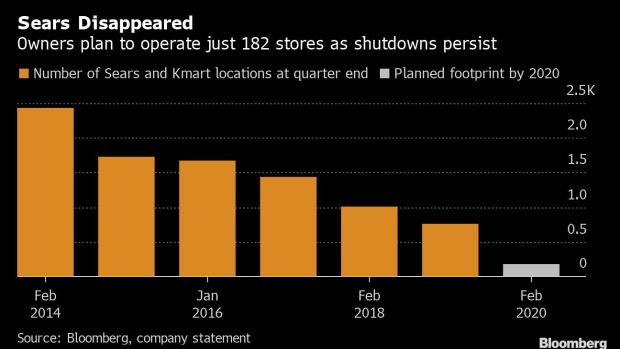 A vehicle sits parked outside of a Sears Holdings Corp. store in San Bruno, California, U.S., on Friday, Dec. 28, 2018. Sears got another chance at survival after Chairman Eddie Lampert put together a last-minute, last-ditch bid to buy the retailer out of bankruptcy. Photographer: David Paul Morris/Bloomberg , Bloomberg

(Bloomberg) -- The owner of Sears and Kmart is closing another 96 stores, renewing doubts about the department store chains’ long-term future.

Transform Holdco LLC said in an emailed statement that it “has faced a difficult retail environment and other challenges” and is “pruning operations that have struggled due to increased competition and other factors.”

The move will bring the number of Sears and Kmart locations down to 182. The company also announced $250 million of new capital from its owners, led by Eddie Lampert’s hedge fund ESL Investments Inc., along with a third-party investor.

Details of the announcement were first reported by Reuters.

The announcement shows that Sears, which struggled for years under the control of Lampert, is still withering as consumers move on from the chain. After purchasing Sears’s assets out of bankruptcy earlier this year, Lampert’s hedge fund and other owners have been shuttering stores by the dozens. They’ve also been embroiled in litigation left over from contentious Chapter 11 proceedings.

“We will endeavor to create and deliver value through a strategic combination of our better performing retail stores and our service businesses, brands and other assets, and expect to realize a significant return on our extensive portfolio of owned and leased real estate,” the company said. It listed the Kenmore and DieHard brands as assets, among other business units.

ESL can recoup some of its ongoing investment in Sears through the sale of properties it closes, but to maximize returns the hedge fund may need some help, according to Jim Sullivan, an equity research analyst at BTIG who follows the commercial property industry.

“To develop these assets and maximize the returns you really need to be working with one of the major established retail real estate developers,” Sullivan said.

Lampert bought Kmart out of Chapter 11 in 2003 and merged it with Sears two years later. But the combination of the two ailing retailers lagged behind ascendant merchants like Walmart Inc., Target Corp. and Amazon.com Inc, and it spiraled into a tailspin that produced almost $11 billion in losses until the company finally filed for bankruptcy in October 2018.

Lampert’s vision for the new company involves smaller locations emphasizing appliances and other home items. To that end, he bought the remaining stake in Sears Hometown and Outlet Stores Inc. he didn’t already control, bringing the unit spun off in 2012 back under his oversight. The smaller Hometown stores feature appliances as well as lawn and garden merchandise and are located in areas not served by full-sized Sears stores.

Gabriella Santaniello, founder of retail consulting firm A Line Partners, said she’s not surprised by the latest round of store closures from Sears, and that it makes more sense for the company to focus on the Sears Hometown chain.

Sears has “lost so much of their footprint and their relevance with the American consumer,” Santaniello said. “It’s not that crazy of a strategy for them to just focus on” appliances, she said, adding that “in terms of apparel and being a competitor in that space, that ship has sailed completely.”

--With assistance from Lauren Coleman-Lochner and Jordyn Holman.

To contact the reporters on this story: Eliza Ronalds-Hannon in New York at eronaldshann@bloomberg.net;Jonathan Roeder in Chicago at jroeder@bloomberg.net