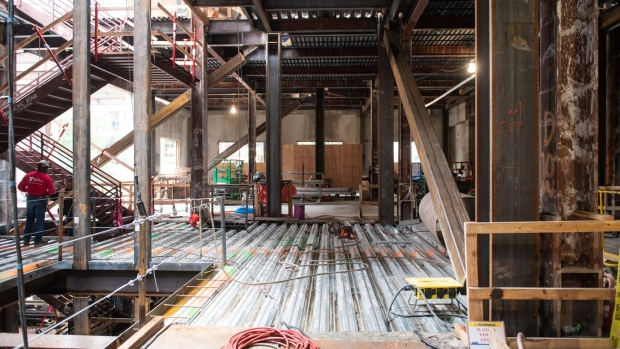 A contractor cuts a metal rod at the Federal Reserve Building while under construction in Seattle, Washington, U.S., on Wednesday, Aug. 21, 2019. Martin Selig is an 82-year old legend in the local real estate scene and a Trump supporter in a liberal Seattle while his daughter Jordan Selig is 32 and styles herself an environmentalist. The Selig family has been a fixture of Seattle's business scene for decade. Photographer: Chona Kasinger/Bloomberg , Bloomberg

(Bloomberg) -- One of the busiest construction markets in the U.S. is going quiet.

With few exceptions, residential and commercial construction in Seattle and the rest of Washington state must stop for two weeks, according to a memo from the office of Governor Jay Inslee. The document seeks to clarify which work is deemed “essential” under a stay-at-home order he issued this week to slow one of the worst coronavirus outbreaks in the nation.

His order stands to put a dramatic stop to activity in a city that’s been a perpetual worksite in recent years. Tower after tower has gone up for Amazon.com Inc.’s urban campus. Seattle also is in the midst of an arena renovation for a new National Hockey League team, and a $1.8 billion expansion of the Washington State Convention Center. It’s all helped the city rank near the top of a list for the most construction cranes in North America.

Construction workers and general contractors had been in limbo since the governor’s initial order on Monday, with some plowing forward as the deadline to shut down approached at midnight Wednesday. The industry employs 222,100 people statewide, according to the Associated General Contractors of America.

Some of those will be allowed to carry on, provided contractors meet guidelines for worker safety and social distancing. The memo also provides exceptions, such as for construction of publicly funded affordable housing, and emergency repairs to homes and other buildings. Contractors can also do work to prevent damage to open worksites and ensure safety.

“This is definitely more restrictive than we had feared,” said David D’Hondt, executive vice president of the Associated General Contractor’s Washington chapter, citing the decision by the state’s department of transportation to shut down most of its operations.

He added that local governments, including school districts, will have the authority to decide what public infrastructure projects can go forward in their jurisdictions, which could soften the blow on the industry. That could mean that major transit projects in the Seattle continue, as well as the hockey arena and convention center, he said.

“It’s just really hard to say how many people are going to be affected,” D’Hondt said. “It’s going to be a significant number.”