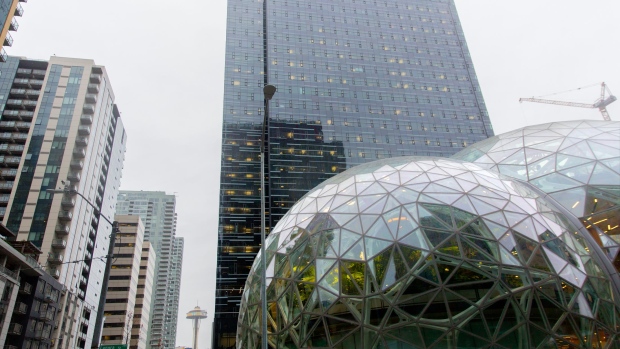 The Space Needle can be seen from the site of the Amazon Spheres in downtown Seattle on Tuesday, January 23, 2018. , Photographer: Mike Kane/Bloomberg/Bloomberg

(Bloomberg) -- It was, as the local public radio station said, the day “Seattle Nice” died. On May 2, the residents of Seattle were hit with a one-two punch. For months, the city council had been debating a new tax on large employers to raise $75 million for new affordable housing and services for the homeless, whose growing population had burst out of shelters and into tents around the city.

In the late morning, just before a council hearing, a columnist for the Seattle Times broke the news that Amazon.com Inc., the city’s largest employer, was playing hardball. The typically hermetic company said it paused expansion plans for buildings that would house about 7,000 employees pending the outcome of the upcoming tax vote.

Later that night, hundreds of residents packed a Methodist church in the gentrifying Ballard neighborhood, turning what was supposed to be a civil town hall discussion into a scrum that exposed deep division in the city.

Homeowners shouted down the council members and each other—decrying how growth and homeless encampments were encroaching into neighborhoods. Some opposed the tax, shivering at the thought of risking jobs at the city’s largest employer and furious about giving more money to a municipal government that already seemed inept at addressing housing issues. “It's refreshing to see ordinary citizens revolting against this lousy city council,” one man said to cheers.

Others supported the measure, enraged by what they saw as lack of compassion by their neighbors and struggling to understand why lefty Seattle should feel subservient to one of the largest corporations in the world. One supporter, taking the floor at the front of the church, suggested it could take $5 billion to build enough affordable housing to meet demand. “That's a pretty conservative estimate,” he said. “Five billion is how much Jeff Bezos made in 10 minutes when Amazon announced they bought Whole Foods."

The debate raged on for two weeks, culminating on Monday when the city council levied a scaled-back version of the tax, voting 9-0 to raise about $50 million. Under the new law, companies bringing in more than $20 million in revenue a year would be required to pay $275 per employee every year. Amazon has more than 40,000 employees at its headquarters in Seattle, meaning the tax could cost the e-commerce giant more than $10 million annually. The council came out so strongly for the bill that it was protected against a mayoral veto.

In a statement, Amazon Vice President Drew Herdener said Amazon was "disappointed" in the vote and that the company remains "very apprehensive about the future created by the council’s hostile approach and rhetoric toward larger businesses, which forces us to question our growth here."

The showdown demonstrates how politics and economics have shifted in Seattle, where the pressure to address the city’s growing pains has surpassed the conventional wisdom that attracting new jobs is the top civic priority. Council member Mike O’Brien, a co-sponsor of the legislation, said in an interview last week that he doubts the tax would slow expansion. But even if it did, he added, that may not be such a bad thing. “We’re not really supposed to say that," he said, but “I think it's actually a question we probably should be asking: Can cities grow too fast?”

For years, Seattle has been one of the fastest growing metros in the country. The city’s unemployment rate is now down to 3.5 percent, and the boom has put unprecedented stress on the housing market in this city hemmed in by a bay, lakes, and mountains.

“The dynamics we see in Seattle are an extreme example of dynamics we see in other very successful labor markets,” said Enrico Moretti, an economics professor at University of California, Berkeley, whose book “The New Geography of Jobs” explores the divergent paths of manufacturing hubs and technology cities. “These cities have a very good problem in terms of employment, and wages in particular.”

Moretti found that each new tech job creates four to five non-tech jobs over the next decade. Roughly 40 percent of the non-tech work is for professionals—think lawyers, doctors, architects—and the remaining 60 percent are non-professional, like Uber drivers, store clerks, or restaurant servers. “The labor market is a tide that lifts most boats, with one big issue,” Moretti paused, “the cost of living, of course.”

That’s because while there are more jobs across the spectrum, and generally rising wages, the supply of housing doesn’t keep up. Rather than slowing down Amazon and its ilk with a tax on jobs, Moretti said, cities should “accommodate as many housing units as possible, especially with transit.” Economically, he said, that makes the most sense. Whether it can pass political muster is another question.

As bad as the housing crunch is in Seattle—home prices have soared more than 14 percent in the past year—it is still adding more new units than other boom towns like San Francisco, said Jed Kolko, chief economist at Indeed. “More than any of the large metros, Seattle is building upwards rather than sprawling out,” Kolko said. The city has channeled new density and construction into to core areas, which are called “urban villages,” like parts of Ballard, where the town hall was held. But single-family zones, which account for a large portion of the city—have largely been sacrosanct.

While homelessness is driven by many factors, including the nationwide opioid epidemic and the state’s meager mental health resources, new research indicates the city’s rising housing costs corresponds to increases in the number of people without shelter. A pro bono report that McKinsey & Co. produced for the Seattle Metropolitan Chamber of Commerce found a “96 percent statistical correlation between the region’s rent increases and the increase in homelessness,” according to the Seattle Times.

And despite the city spending more than $50 million a year in services, the local homeless population has been growing. "The city does not have a revenue problem–it has a spending efficiency problem," Amazon's Herdener said. A count last year found King County’s homeless population had reached more than 11,000 people, and the city’s database tracking unauthorized encampments now contains more than 400 unique locations, with people living in tents under freeways and in parks, atop graves at a cemetery and in medians across the street from houses. The McKinsey report estimated the county would have to spend between $360 million and $410 million to build the number of affordable units and services needed.

"It becomes pretty clear to me that there's no way we solve the scale of the crisis we're in … without additional resources on the housing side,” said council member O’Brien. “We just have to have more housing.” O’Brien said he’s particularly hamstrung in finding funding because the state constitution forbids an income tax, making the government dependent on property and sales taxes. By some measures, the City of Seattle has the most regressive tax scheme in the most regressive tax state in the county.

In their hunt for tax revenue, politicians saw fertile ground in large companies—Amazon chief among them—that have built Seattle into an established tech hub. Amazon grew its employee base off the tech community developed by Microsoft Corp., which in turn worked off the engineering community developed by Boeing Co. and the University of Washington. The effect was to solidify Seattle’s place on the industry’s map. Google and Facebook now also have large outposts in the city. “Here is what is really cool about what’s going on right now,” said Michael Schutzler, CEO of the Washington Technology Industry Association, which counts Amazon a member. “Amazon completely changed the world of tech roughly 10 years ago when they made the cloud a reality. More so than another other company in the world, they have radically changed machine learning, which is now being called AI.”

That clustering effect has leading other large tech companies to set up major outposts in Seattle. That core talent for artificial intelligence is in Seattle, Schultzer said, “nowhere else, not in the Valley, not in Boston. Now they are recruiting from all over the country to move people here.” The day after Amazon’s threat over the head tax, Facebook announced a new AI lab in the city, which will be led by a professor at the University of Washington.

As the industry booms, will Seattle lawmakers say no to Amazon and other tech companies, or to homeowners resisting changing the fabric of their city? “Good question,” O’Brien said. “I would say neither of those are particular easy.” Homeowners have been fighting rezoning for years. “The Amazon vocal-ness,” he said of the company’s reprisals, “has just come out in the last week.”

In the end, the council tried to thread the needle, at least a little. In a concession to the homeowners, the council forced itself to evaluate the success of the spending if it wants to renew the tax after five years, and Amazon, despite its dismay at the outcome, said it’s restarting construction planning on one of the offices it had paused. But the council also recommended spending most of the funding to build affordable housing, starting to chip away at the deficit. Ultimately the council stared down opposition from its biggest employers and, unanimously, opted to tax them anyway. Later this year the council will consider rezoning for more housing density, and the big question will be whether it gives change-averse homeowners the same treatment.

To contact the author of this story: Karen Weise in Seattle at kweise@bloomberg.net.

To contact the editor responsible for this story: Anne Vandermey at avandermey@bloomberg.net, Emily Biuso