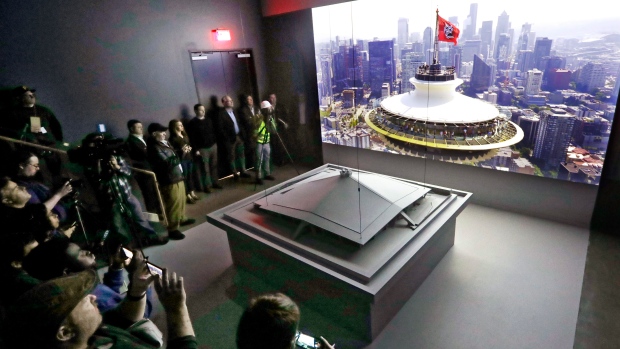 Media members stand near a model of the renovated KeyArena as a video about the plan plays behind during a presentation about the arena that will house an NHL hockey team, Thursday, April 18, 2019, at Seattle Center in Seattle. , AP Photo/Elaine Thompson

​Seattle’s new National Hockey League franchise doesn’t have a name yet and won’t take the ice for another two years, but the team already passed a key business milestone.

The Seattle team has their first corporate sponsor: life-insurance firm Symetra Financial Corp. The Bellevue, Washington-based company will have its logo all over the team’s new arena, along with naming rights to one of the building’s two club areas.

The deal helps bring validation after years of fighting to return hockey to Seattle, said Tod Leiweke, chief executive officer of the franchise. It’s also a boost for the team’s arena, a US$930 million project privately funded by Oak View Group, a facilities company co-founded by Tod’s brother Tim.

“To get this to work, we had to make the assumption that partners like Symetra would be there, and sure enough -- two years out -- Symetra steps up and says, ‘We believe in what you’re doing,’” Leiweke said. “It’s a big deal.”

The team is betting that a new franchise and a new venue -- built on the site of the old KeyArena -- will draw support from a city that’s been publicly advocating for more top-tier sports. Seattle hasn’t had a major hockey franchise since 1975. And its SuperSonics NBA team departed in 2008 for Oklahoma City, leaving outrage and controversy in its wake.

Though Symetra didn’t disclose terms of the deal, CEO Margaret Meister described it as the biggest marketing partnership in company history. Symetra recently began running national television ads for the first time, and the NHL arrangement is part of an effort to nearly double its annual marketing budget.

“We’re not super well known,” Meister said. “We want to build our awareness across the country, and we think we can do that with this partnership.”

That’s critical in the crowded life insurance and annuities industry, where brand recognition is essential to signing up customers. The company was originally a unit of Safeco Corp. In 2004, Warren Buffett’s Berkshire Hathaway Inc. and White Mountains Insurance Group Ltd. led an investor group that took over the business and renamed it. Japan’s Sumitomo Life Insurance Co. later purchased Symetra. It currently has roughly US$50 billion in assets and 2.6 million customers.

Though sales of annuities dipped in the U.S. in 2016 and 2017, the Trump Administration’s decision to back off an Obama-era policy requiring financial advisers to put clients’ interests ahead of their own has helped reset the marketplace. Sales of the retirement products have begun to climb again and are also benefiting from volatile equity markets, which send investors looking for products with guaranteed returns.

As part of the deal, Symetra will have its logo in the ice -- a new option for NHL franchise partners -- plus signs on the boards and on the team’s media backdrop. Earlier this year, the company put its name on the jerseys of the Seattle Storm, the WNBA team that will share the new arena with the hockey franchise. NHL Seattle wouldn’t share details about the length of the contract with Symetra, but said it was “comparable” to the Storm deal, which was for 10 years.

In addition to the advertising, Symetra and the hockey team say they’ll work together on community programs. Though neither were specific about what those might be, they have two years to figure it out.

In the meantime, progress continues on the arena and other business initiatives, such as finding a naming-rights partner and building a fan base. When the team started taking season-ticket signups last year, it had 32,000 depositors on the first day. Leiweke says the waitlist is an additional 27,000 names long, and the team expects to sell out its allotment of suites in the next few months. He said the Symetra deal will help there.

“We feel indebted to Symetra for this early support,” he said. “We’re going to do everything we can to build their brand.”

--With assistance from Katherine Chiglinsky