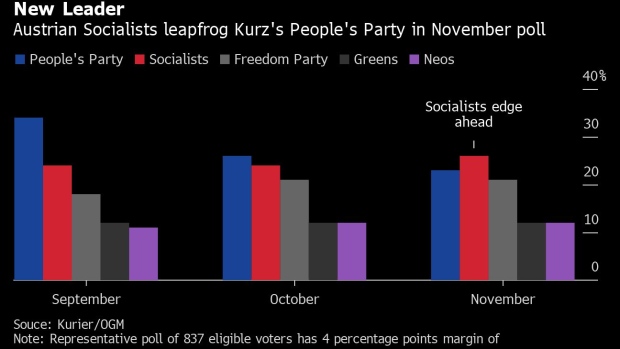 Sebastian Kurz, Austria's chancellor, speaks during a Bloomberg Television interview in New York, U.S. on Wednesday, Sept. 22, 2021. A defeat for Germany's conservatives at weekend elections would be a blow for the center-right European People's Party, according to Kurz. , Bloomberg

(Bloomberg) -- Austria’s social democrats edged ahead of the governing People’s Party in a voter poll for the first time since 2017, reflecting the political shift brought about by a corruption probe against former Chancellor Sebastian Kurz.

Support for the Socialist Party rose 2 percentage points from last month to 26% of respondents in a survey conducted by the OGM research institute for the Kurier newspaper. Backing for Kurz’s conservative group fell 3 percentage points to 24%.

Despite the upheaval, the largest opposition party has struggled to capitalize on allegations of corruption that led to Kurz resigning last month, with its latest gain helped by public frustration over the government’s handling of the coronavirus pandemic.

Chancellor Alexander Schallenberg, Kurz’s hand-picked successor, imposed a lockdown to fight a surge in infections, contradicting earlier pledges to avoid a fresh round of tough restrictions.

The fate of the ruling coalition ultimately depends on how long the Green Party -- which was flat in the survey -- maintains its support.

While most parties have shown little appetite for a third snap vote since 2017, further revelations into the charges that toppled Kurz and the prospect of a German-style three-way coalition could eventually convince the Greens to pull the plug. The next elections are officially scheduled for 2024.