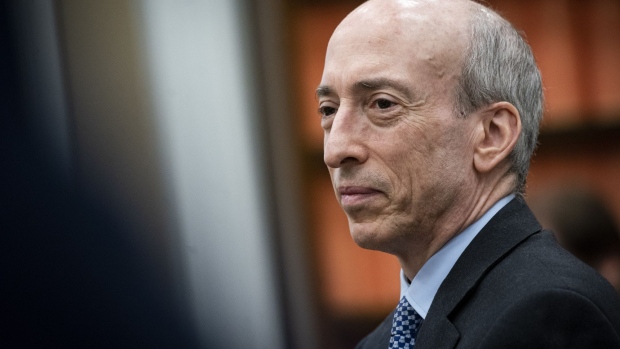 (Bloomberg) -- US Securities and Exchange Commission Chair Gary Gensler is going back on the offensive against those in the crypto industry that he says are purposefully shirking regulations.

Gensler on Thursday repeated his demands that crypto exchanges, brokers and attorneys in the digital-coin industry comply with securities rules. It’s the latest salvo by the SEC chief in his push to clamp down on an asset class that he says often operates in legal gray areas.

The SEC has been at odds with much of the crypto industry over whether its regulations should apply to projects that are more decentralized than stocks or bonds since long before Gensler took over the agency in April 2021. Tensions have increased during the past year with the SEC chair repeatedly arguing that most tokens are covered by those rules.

“The public deserves the same protections from your clients that they get with other issuers of securities,” Gensler said in remarks prepared for Thursday’s Practising Law Institute’s SEC Speaks event in Washington.  “Not liking the message isn’t the same thing as not receiving it,” Gensler said.

American lawmakers are now considering multiple proposals that would significantly boost the power of the Commodity Futures Trading Commission, the US’s swaps and futures regulator, to oversee crypto assets. Some securities lawyers say that passage of those bills would diminish the SEC’s authority over the asset class.

On Thursday, Gensler said any legislation should be done in a way that maintains the SEC’s oversight of “crypto security tokens.” He added that those assets make up the bulk of digital assets that are currently traded.