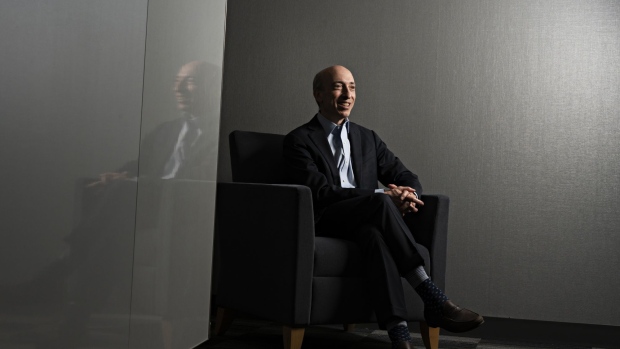 Gary Gensler, chairman of the U.S. Securities and Exchange Commission (SEC), at the SEC headquarters office in Washington, D.C., U.S., on Thursday, July 22, 2021. In his first extensive interview about the digital money craze, Gensler signaled that his deep interest in the subject doesn't mean he's simpatico with the hands-off oversight approach that many enthusiasts would like to see. , Bloomberg

(Bloomberg) -- Securities and Exchange Commission Chair Gary Gensler has a warning for hundreds of Chinese companies that have raised billions of dollars in U.S. markets: Submit to more scrutiny soon or get kicked out.

In a Tuesday interview, he pledged to strictly enforce a three-year deadline that requires Chinese firms to permit inspections of their financial audits. If businesses refuse, their shares could be delisted from the New York Stock Exchange and Nasdaq as soon as 2024.

“The path is clear,” Gensler said. “The clock is ticking.”

The tough stance would seem to squash the hopes of some on Wall Street that Gensler might drag his feet in implementing the mandate from Congress and give Beijing more time to strike a deal with Washington regulators that allows the gravy train of Chinese stock sales to continue. They’ve been lucrative for big banks, exchanges and asset managers.

In his comments, Gensler laid out how he plans to deal with a multitude of tricky investor protection issues involving China. The conflicts, which have festered for almost two decades, have come to the fore in recent months as the Chinese government reined in prominent companies that trade on American exchanges, causing massive drops in their share prices and rattling investors.

Read More: Why ‘Delisting’ Is a Worry in China-U.S. Market Mess The actions prompted the SEC last month to suspend new initial public offerings of China-based companies until they more clearly detail the potential pitfalls that shareholders face. On Tuesday, Gensler said he expects the same level of transparency from every Chinese firm that sells stock in the U.S., including those that already trade in New York.

Investors need “full and fair” disclosure, Gensler said, adding that the agency was looking especially for information on “regulatory risks, the various political risks” that companies in China could encounter.

Those enhanced disclosures are likely to come by next year, Gensler said. He declined to say what consequences firms would face for not complying.

As for the IPO pause, Gensler signaled it would continue as long as companies disclosures aren’t adequate. It could last “three weeks or three months,” he said. “It is really up to the issuers” and their lawyers and accountants.

Tensions between the U.S. and China have flared in recent years, fueled by the Trump administration’s trade policies and its efforts to blame the country for the coronavirus pandemic. Still, Washington’s ire with Beijing is not a partisan issue and President Joe Biden has mostly kept a similar posture.

Read More: Why China Is Cracking Down on Its Technology Giants

The SEC was drawn into the conflict last year when lawmakers passed legislation calling for the agency to close loopholes that have allowed Chinese companies to shield their books from U.S. inspectors. More than 50 other countries permit the reviews of audits, which are conducted by the U.S.’s Public Company Accounting Oversight Board. China has refused, citing strict confidentiality laws and national security concerns.

There are now 281 Chinese companies listed in the U.S., as well as another 110 based in Hong Kong, where American inspectors are also denied full access to financial data. That includes Alibaba Group Holding Ltd. and Baidu Inc., large firms that are owned by many individual investors and widely held emerging market mutual funds.

The turmoil surrounding the July initial offering of Didi Global Inc. has also raised questions about the SEC’s role in signing off on IPOs that can quickly turn into disastrous investments, especially for unsophisticated traders. Gensler declined to comment on any specific companies.

In recent weeks, the Chinese government has signaled that it wants to resolve the standoff over the audit requirement. On Monday the State Council issued guidelines aimed at boosting cooperation with cross-border accounting oversight.

Read More: Why China and U.S. Are Clasing Over Stock Listings

Gensler, however, indicated there was little to negotiate after the bipartisan passage of the December 2020 law, called the Holding Foreign Companies Accountable Act.

While he declined to comment on any conversations that the SEC may be having with Chinese regulators, Gensler didn’t indicate that a resolution was near. “I have not been informed about anything yet that is a clear path forward,” he said.

Gensler said that PCAOB inspectors should be given access to any audit they choose and the ability to review so-called work papers, the documents underpinning accountants’ assessments.

Advocates who have been pushing the SEC to demand more transparency from Chinese public companies said they were heartened that the SEC chair, who came aboard in April, is focusing on the issue after years of inaction at the regulator.

“Chairman Gensler is the right man to answer the China question because he cares deeply about investor protection,” said Christopher Iacovella, who runs the American Securities Association, a group of mid-sized brokerage firms. China can’t “continue to manipulate our markets at the expense of America’s working families.”