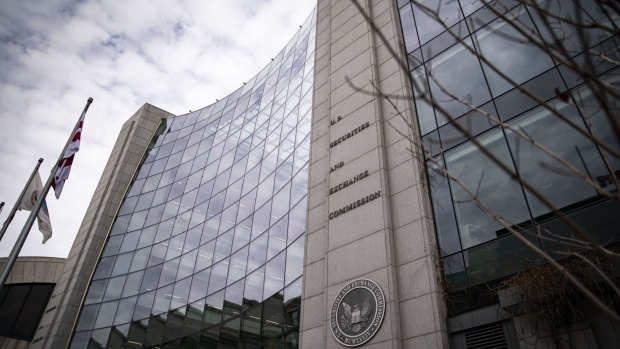 The U.S. Securities and Exchange Commission headquarters in Washington, D.C., U.S., on Wednesday, Feb. 23, 2022. Hedge funds and other investors would have less time to disclose that they've acquired a significant stake in a company under new rules proposed by the SEC. , Bloomberg

(Bloomberg Law) -- The Fifth Circuit darkened the legal cloud over the SEC’s use of in-house judges to hear cases, saying Wednesday the system violated a hedge fund manager’s constitutional right to a jury trial in federal court.

Congress’ delegation of legislative power to the Securities and Exchange Commission was unconstitutional because it failed to “provide an intelligible principle by which the SEC would exercise the delegated power,” the US Court of Appeals for the Fifth Circuit said in a 2-1 opinion.

Statutory restrictions on the removal of the SEC’s administrative law judges are also unconstitutional, the opinion said.

The US Supreme Court agreed May 16 to take a look at a narrower case out of the Fifth Circuit regarding which courts have jurisdiction to hear challenges to the agency’s administrative law judges. The CPA in that case also challenged the in-house judges’ protections against removal.

An SEC spokesperson said the agency was assessing the decision and working with the Justice Department to determine its next steps.

George Jarkesy Jr. established two hedge funds with around $24 million in assets and brought in Patriot28 LLC as an investment adviser. They allegedly misrepresented investment parameters and safeguards and overvalued assets to increase the fees they could charge, and the SEC began an in-house enforcement proceeding.

The Seventh Amendment “guarantees” Jarkesy and Patriot28 a jury trial because the agency’s “enforcement action is akin to traditional actions at law to which the jury-trial right attaches,” Judge Jennifer Walker Elrod’s majority opinion said. “And Congress, or an agency acting pursuant to congressional authorization, cannot assign the adjudication of such claims to an agency because such claims do not concern public rights alone.”

Some “elements” of the SEC’s administrative action are “more equitable in nature, but that fact does not invalidate the jury-trial right that attaches because of the civil penalties sought,” Elrod said.

Jarkesy and Patriot28 also argued that Congress unconstitutionally delegated its power when it allowed the SEC to pick whether to pursue enforcement cases in federal courts or internally, and the Fifth Circuit agrees, the opinion said.

The agency countered that choosing where to bring an enforcement action was merely a type of “prosecutorial discretion.” But that “reflects a misunderstanding of the nature of the delegated power,” Elrod said.

Congress “effectively gave the SEC the power to decide which defendants should receive certain legal processes” accompanying federal court proceedings, according to the opinion. “Such a decision—to assign certain actions to agency adjudication—is a power that Congress uniquely possesses,” and Congress didn’t give the agency “an intelligible principle by which to exercise that power.”

SEC administrative law judges have “two layers of for-cause protection” that “impede” the control a president should have over their roles based on their performance of “substantial executive functions,” Elrod said. The court didn’t decide if that alone was enough to vacate the judgment below because it had already decided to vacate on other grounds.

Jarkesy and Patriot28’s SEC saga goes back to the agency’s 2011 investigation and 2013 commencement of in-house enforcement proceedings. An administrative law judge ultimately concluded they had committed securities fraud, and Jarkesy and Patriot28 appealed internally to the Commission itself.

The Supreme Court in 2018—while Jarkesy’s administrative appeal was pending—determined the SEC’s in-house judges were actually officers and had been unconstitutionally appointed. After the high court’s Lucia v. SEC ruling, the agency offered parties new hearings before a different, properly appointed ALJ, but Jarkesy waived this right.

The Commission affirmed the in-house judge’s fraud finding and imposed a $300,000 civil fine, $685,000 in disgorgement, and “barred Jarkesy from various securities industry activities,” Elrod said. Jarkesy then brought the case to the Fifth Circuit, seeking review of the Commission decision.

Jarkesy and Patriot28 attempted to halt the SEC administrative proceedings early on when they sued the agency in federal district court in D.C. in 2014. They twice lost on the same jurisdictional grounds that the Supreme Court just agreed to weigh in on in Cochran v. SEC.

Jarkesy and others challenging SEC proceedings must complete the agency adjudication process before seeking review in the federal courts, the US Court of Appeals for the D.C. Circuit said in 2015. Once they have taken those steps, parties may seek review of the final Commission decision in the D.C. Circuit or the circuit where they reside or have their principal place of business.

The SEC pointed to the D.C. Circuit’s Jarkesy opinion—along with similar opinions in the Second, Fourth, Seventh, and Eleventh circuits—as evidence of a circuit split when it petitioned the Supreme Court for review in Cochran.

SEC files on Jarkesy’s case, like Cochran’s, were among those that were improperly uploaded onto servers maintained for Enforcement Division staff. But “the timeline of filings and Commission actions in each matter shows” that memo access wouldn’t have affected any Enforcement Division filings, the agency said in an April statement.

S. Michael McColloch and Karen Cook, both based in Dallas, represent Jarkesy and Patriot28.

—With assistance from Ben Bain and Greg Stohr.

To contact the reporter on this story: Jennifer Bennett in Washington at jbennett@bloomberglaw.com

To contact the editor responsible for this story: Rob Tricchinelli at rtricchinelli@bloomberglaw.com

(Updates with additional reporting in the 13th through 20th paragraphs.)