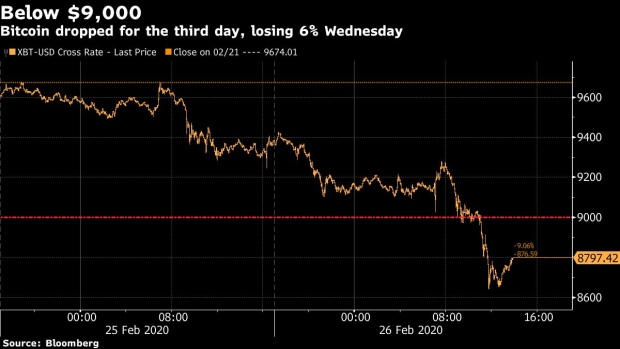 (Bloomberg) -- The U.S. Securities and Exchange Commission disapproved the last proposal for a Bitcoin exchange-traded fund, likely destroying any remnants of hope from digital currency fans that a fund would get the green light this year.

The SEC denied an application Wednesday by Wilshire Phoenix and NYSE Arca Inc. to list a fund that wanted to mix Bitcoin and short-term Treasuries, according to an order posted on the regulator’s website. Bitcoin dropped more than 6% to about $8,819 as of 4:13 p.m. in New York.

“The Commission concludes that NYSE Arca has not established that the relevant Bitcoin market possesses a resistance to manipulation that is unique beyond that of traditional security or commodity markets such that it is inherently resistant to manipulation,” the regulator said. A Wilshire representative didn’t immediately reply to a request for comment.

The SEC has long urged issuers to address a wide array of risks and concerns associated with a potential crypto fund, including manipulation, liquidity and custody issues.

In a dissenting statement, Commissioner Hester Peirce, who is a proponent of cryptocurrency products, said the disapproval leads her “to conclude that this Commission is unwilling to approve the listing of any product that would provide access to the market for Bitcoin and that no filing will meet the ever-shifting standards that this Commission insists on applying to Bitcoin-related products—and only to Bitcoin-related products.”

Wilshire’s proposal to mix Bitcoin with T-bills was meant, in part, to cushion against crypto volatility. The firm’s proposal was the last seeking approval from the U.S. regulator after a number of others were rejected or withdrawn. It’s a far cry from two years ago, when a mass of would-be issuers were duking it out to be the first to market.

“I didn’t see any viable reason why this would be accepted when others were denied,” said James Seyffart, an analyst with Bloomberg Intelligence.

Here’s what other market-watchers are saying:

“Bitcoin ETFs make sense based on the efficiency of the ETF investment wrapper, but we understand the regulators stance on surveillance and market manipulation concerns,” said Frank Koudelka, global ETF product specialist at State Street. “We are excited about the prospects for ETFs leveraging the blockchain, regardless of if they are digital currency or traditional asset classes. This ultimately provides the ability to broaden distribution and enhance efficiency.”

--With assistance from Ben Bain and Jesse Westbrook.