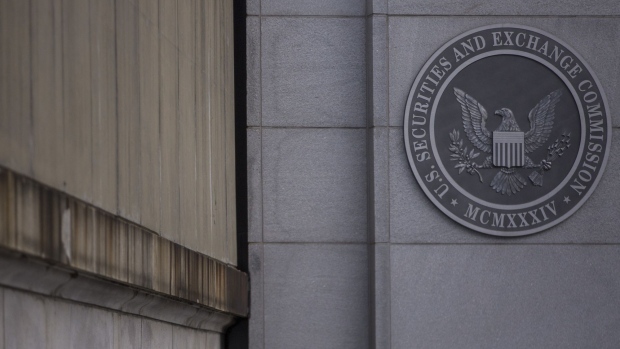 Signage is displayed outside the headquarters building of the U.S. Securities and Exchange Commission (SEC) in Washington, D.C., U.S., on Dec. 22, 2018. Parts of the U.S. government shut down on Saturday for the third time this year after a bipartisan spending deal collapsed over President Donald Trump's demands for more money to build a wall along the U.S.-Mexico border. , Bloomberg

(Bloomberg) -- Investment giants like Pacific Investment Management Co. are facing fresh restrictions on their ability to trade bonds internally between different funds under US Securities and Exchange Commission rules that took effect this week.

The crackdown on the practice, which is widely known as cross-trading, was opposed by Pimco, T. Rowe Price Group Inc. and other managers. The changes follow a lengthy phase-in of sweeping new rules on mutual fund valuations that the SEC passed in 2020 to bolster investor protections.

Bond transactions generally take place off of exchanges with significant reliance on intermediaries that often don’t have market pricing data readily available. The restrictions are intended to ensure that investors aren’t short-changed by their mutual fund buying bonds from another fund managed by the same company at an unrealistically high price.

Cross trading has long been a controversial feature of the market. In one high-profile example, Pimco used the strategy in 2015 to blunt the impact of a wave of client withdrawals following Bill Gross’s sudden exit.

Under the SEC’s new rules, which went into effect on Thursday, a smaller number of securities will be eligible to trade between funds because they’ll no longer be deemed to have a “readily available market quotation.” That label makes assets eligible for cross trading, according to the SEC.

Stock transactions won’t be affected, but investment firms including Pimco and T. Rowe Price have argued that the changes will make it more expensive for investors to purchase bonds. Representatives for both firms declined to comment for this story.

The SEC rebuffed funds’ requests to let them continue cross trading as they have for decades, arguing the changes would make rules for trading between funds more consistent.

While the new rules were passed during the Trump administration, their implementation has fallen to SEC Chair Gary Gensler. The changes dovetail with other efforts by the agency to bring more transparency to fixed-income trading.

The corporate bond market is fragmented and significantly less liquid than stock trading. Some bonds are difficult to find, giving investment firms incentive to cross trade to keep those securities in house if a sister fund needed to sell due to a redemption.

John McClain, a high-yield portfolio manager at Brandywine Global Investment Management, said that the practice has long been in a “very gray area,” but the rule changes could be negative for fixed-income markets.

Pimco, long among the world’s biggest fixed-income managers, told the regulator last year that it typically cross trades US Treasuries, corporate debt and some securitized products. The firm prices those trades based on quotes provided by independent bond dealers, according to a comment letter on the new rules.

It’s often in the best interest of its clients to cross trade securities between funds to save on third-party transaction costs, according to Pimco. This could be advantageous if, for instance, one fund was facing investor redemptions and needed to sell securities while another had extra cash to deploy.

Fund managers have been preparing for the new provision to take effect by putting procedures in place to make a judgment call on whether a transaction can reference a readily available market price, said Russell Sacks, a partner in King & Spalding’s corporate law practice.

(Updates with SEC response to industry pushback in seventh paragraph.)