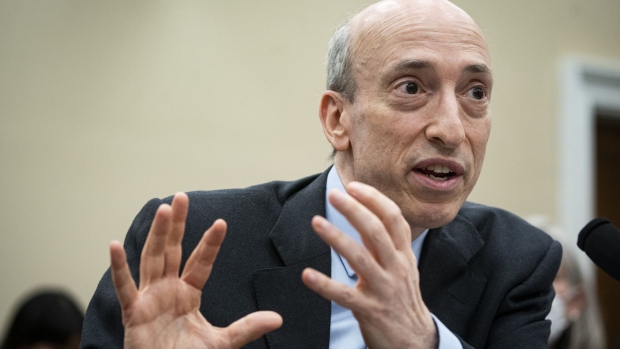 (Bloomberg) -- The US Securities and Exchange Commission will stop short of banning payment for order flow, a controversial way to process retail stock trades, as it proposes new rules for the $48 trillion American equities market.

The decision, described by people familiar with the matter, follows months of internal deliberations at the agency. It marks a win for brokerages that get paid for processing rights, although the SEC may still enact other changes that make the practice less profitable, according to the people.

The regulator is expected to unveil its plans in the coming months.

Wall Street has been on edge since Gary Gensler signaled last year that the agency may outlaw payment for order flow during the overhaul. The practice often involves one brokerage routing retail stock trade orders to another firm for execution rather than to the New York Stock Exchange or Nasdaq.

The arrangements are pitched as giving investors the benefits of greater liquidity, but critics have questioned whether traders actually are getting the best price, with some of their potential profits going to the firm that bought the trading rights.

Long the subject of wonky, market structure debates, payment for order flow crashed in to the US political mainstream during the meme stock madness of 2021.

Unlike some countries where the practice is banned, the arrangements are common in the US and represent a chunk of revenue for Charles Schwab Corp. and Robinhood Markets Inc. Those retail-focused brokerages sell the rights to execute their clients’ trade orders to firms like Citadel Securities and Virtu Financial Inc.

Why the SEC Is Targeting ‘Payment for Order Flow’: QuickTake

Robinhood rose by as much as 12% and Virtu by 11% in morning trading in New York. Later Thursday, Robinhood reversed its gains and fell 2.2% at 2:38 p.m. Virtu maintained a 7.7% advance for the day.

After taking a hard line for months, senior SEC officials have signaled in recent meetings with executives that a ban is no longer on the table, the people said, asking not to be named discussing private conversations. They said the SEC now appears to be focused on other ways to make the market more transparent following pushback from industry.

While the regulator declined to comment on not pursuing the ban, the agency said in a statement Gensler made clear in congressional testimony that “he believes that it’s appropriate to look at ways to freshen up the SEC’s rules to make our equity markets as fair, efficient, and competitive as possible for investors, particularly for retail investors.” Officials are considering a range of possible changes, the agency said.

Backers of payment for order flow say it’s responsible for widespread commission-free trading in the US.

Since 2019, most major online brokerages haven’t charged retail clients fees for their transactions, following a model made popular by Robinhood. Legions of traders who put money in the market for the first time during the Covid-19 pandemic have known nothing else.

Gensler has held the practice up as an example of a lack of transparency in markets. He’s called for changes to create “a level playing field” for retail investors.

The decision by the SEC not to seek a ban could be a victory for brokerages like Robinhood, which rely on revenue from payment-for-order-flow arrangements. However, the firms may still face tough new regulations from the agency.

As part of its overhaul, the SEC is considering a move to lower access fees that exchanges charge brokerages to execute trades for some stocks, which could push more trading onto the exchanges, the people said.

The agency also may propose changes that could affect the complicated system of rebates that exchange operators use to lure trading volume, they said. Additionally, the regulator is weighing a plan to force brokers to disclose more about how much trading with them costs compared with benchmarks, a metric known as price improvement, said the people.

The SEC may also seek to clarify requirements for brokerages to provide “best execution” for stock orders, according to the people.

No final decision has been made on the scope of the overhaul. Even without a ban, taken together, the changes could make payment for order flow less profitable.

Gensler and some of his top deputies recently have been holding extensive talks with trading firms, exchanges, broker-dealers and lobbyists about equity market structure reform, according to the people.

That’s more engagement than previously, with longer and more frequent calls with the chair, the people said.

(Updates with SEC statement in 10th and 19th paragraphs.)