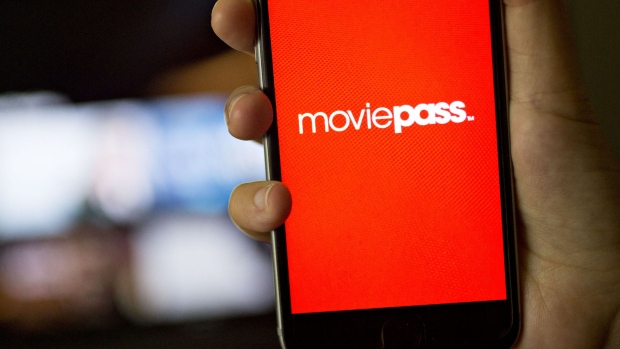 The MoviePass application is displayed on an Apple Inc. iPhone in an arranged photograph taken in Washington, D.C., U.S., on Friday, Aug. 17, 2018. Movie Pass, owned by Helios & Matheson Analytics Inc., said this week that the number of films would be narrowed to six, which followed an earlier announcement that members would be limited to three films for $9.95 a month. Photographer: Andrew Harrer/Bloomberg , Bloomberg

(Bloomberg) -- Two former MoviePass Inc. executives misled investors by promising they could turn a profit charging theater-goers just $9.95 a month for unlimited tickets, the US Securities and Exchange Commission alleged in a lawsuit.

Theodore Farnsworth and Mitch Lowe were accused by the agency of securities fraud in a complaint filed late Monday in federal court in Manhattan. Farnsworth is the former chief executive officer of the analytics firm Helios and Matheson Analytics Inc., which bought MoviePass in 2017 and ran it until it collapsed into bankruptcy in 2020. Lowe was MoviePass’ CEO from 2016 to 2020.

The SEC claims Farnsworth and Lowe made misstatements in financial filings and in the press “regarding whether MoviePass could be profitable at its new, $9.95 per month subscription price.”

Before Helios took over, unlimited subscriptions cost $40 to $50 a month.

“Faced with debilitating negative cash flows -- rather than tell the public the truth -- Farnsworth and Lowe devised fraudulent tactics to prevent MoviePass’s heavy users from using the service, and falsely and misleadingly informed the public that usage had declined naturally or due to measures the company had employed to combat subscribers’ purported violations of MoviePass’s terms and conditions of service,” according to the complaint.

“The complaint concerns matters subject to an investigation that the company and other news outlets publicly disclosed nearly three years ago, and Mr. Farnsworth’s legal team will maintain the challenge to this complaint,” said Chris Bond, a spokesperson for Ted Farnsworth. “Mr. Farnsworth continues to maintain that he has always acted in good faith in the best interests of his companies and shareholders,”

The SEC also named former MoviePass Vice President Khalid Itum as a defendant in the suit. It accused him of submitting false invoices to Helios and MoviePass and pocketing more than $310,000 from the companies.

“Khalid Itum has been unfairly targeted by the SEC in this complaint,” Adam Fee, Itum’s lawyer, said in an emailed statement. “Khalid is proud of the character and integrity he displayed throughout his time at MoviePass, and we look forward to challenging the SEC’s meritless allegations against him in court.”