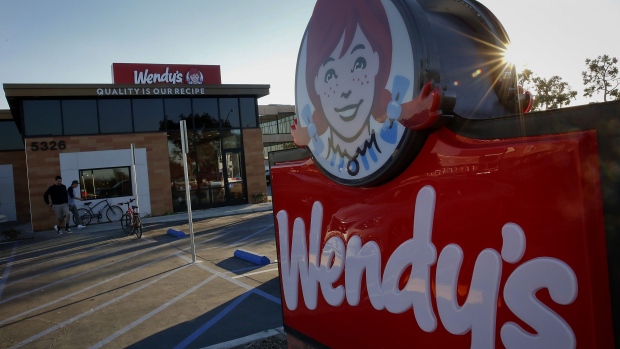 Wendy's Co. signage is displayed outside of a restaurant in Torrance, California. , Bloomberg

(Bloomberg) -- The Securities and Exchange Commission directed Wendy’s Co. to include a shareholder proposal in its proxy materials that could force the company to disclose the use of gestation crates in its pork supply chain.

If passed, the proposal, from the Humane Society of the U.S., would require the burger chain to disclose whether its supply chain uses the stalls to house pregnant sows. The Dublin, Ohio-based company objected to including the proposal.

But in a letter to both parties dated March 16, the SEC sided with the animal-welfare group. “We are unable to concur in your view that the company may exclude the proposal,” the regulator said.

The SEC’s move to let the proposal be considered comes amid a high-profile proxy fight on the same issue between McDonald’s Corp. and activist investor Carl Icahn. Icahn has teamed up with the Humane Society to propose new board members for McDonald’s, escalating his demands that the company force its pork suppliers to stop using gestation crates.

Wendy’s has “followed the guidance for sow housing systems from the state of Ohio and that guidance was supported by HSUS based on public announcements,” company spokesperson Heidi Schauer said. “Animal health and well-being is important to us.” Under Ohio law, gestation crates can be used in existing facilities through 2025. After that, the stalls can only be used to “maximize embryonic welfare” and allow confirmation of pregnancy.

The Humane Society disputed Wendy’s characterization of the group’s support.

The pork industry has used gestation stalls to help ensure that sows have been successfully inseminated, keeping them in narrow, individual stalls without enough space to turn around. For 16 weeks after artificial insemination, the sows are fed on the front end. The crates often have slats on the back end for manure to fall through.

Industry representatives say the practice is in the animals’ best interest because it allows for easier health monitoring. But critics including animal-welfare activists and animal-health experts say the crates are cruel and cause mental and physical anguish.

In 2012, the Humane Society applauded Wendy’s promise to eliminate the crates; in its 2020 corporate responsibility report, the company reiterated this promise.

But rather than eliminating the stalls, Wendy’s has only reduced the amount of time the pigs spend in them to six weeks from 16 weeks, the society says. The group’s proposal, submitted in November, would require the restaurant chain to share the percentage of pork that is gestation-crate free, as well as the risks the company faces for continuing to use them in its supply chain despite public statements that said otherwise.

“Our engagements with Wendy’s over the years gave us huge pause and reason for concern that the company wasn’t actually doing what it claimed to be doing,” said Matthew Prescott, senior director of food and agriculture at the Humane Society. “Based on our knowledge of what the country’s largest pork producers are doing with regard to gestation crates, we were skeptical that Wendy’s claims were true.”

The company didn’t address language in its 2020 corporate responsibility report that reiterated its promise to eliminate the crates.

In 2012, the same year that Wendy’s, McDonald’s and other chains made commitments to eliminate the stalls, the American Association of Swine Veterinarians approved a definition for “group housing” that keeps multiple pigs living together only “after confirmed pregnant.” Typically, the pregnancy tests occurs at about six weeks after insemination, meaning that instead of 16 weeks of confinement, pigs in “group housing” are in crates for six weeks.

Wendy’s website currently refers to its goal to “committing to transition to pork raised in open pen/group housing by the end of 2022,” specifically stating that a sow “may be housed in an individual pen until pregnancy is confirmed (a period that our suppliers report is typically 4-6 weeks).” This is done to ensure successful embryo attachment, it says.