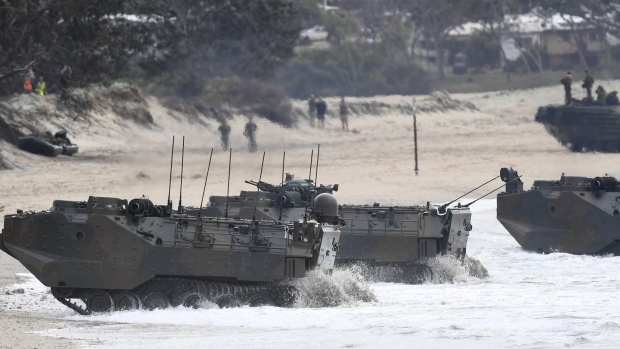 BOWEN, AUSTRALIA - JULY 22: Japanese AAVs (Assault Amphibious Vehicle) come ashore in a beach landing on July 22, 2019 in Bowen, Australia. Exercise Talisman Sabre 2019 is the largest exercise that the Australian Defence Force (ADF) conducts with all four services of the United States armed forces. The biennial exercise focuses on crisis action planning and humanitarian missions, enhancing participating nations' capabilities to deal with regional contingencies and terrorism. It is the first time the NZDF has been invited to participate fully, with NZDF personnel to be working as part of a large force led by the Australians and NZDF military assets will be integrated with those of the ADF and the US armed forces. (Photo by Ian Hitchcock/Getty Images) , Photographer: Ian Hitchcock/Getty Images AsiaPac

(Bloomberg) -- A second Chinese spy vessel is on track to enter waters off Australia’s northeast coast, adding to Beijing’s surveillance presence in the area as joint military exercises between Australia and the U.S. kicked off last week, the Australian Broadcasting Corp. reported.

Approaching Australia through the Solomon Sea around Papua New Guinea, the vessel joins a larger Chinese auxiliary general intelligence ship that was earlier spotted heading toward the country through the Torres Strait and is being monitored by Australia’s defense force, it said.

The vessels are expected to monitor the Talisman Sabre exercises, a routine military collaboration training between the U.S. and Australia which take place every two years.

Although Beijing has utilized intelligence-gathering measures on previous occasions, this is the first time the country has deployed a second vessel and marks an “unusual” development, ABC said, citing defense force officials. In 2019, a Chinese ship remained just outside territorial waters but within Australia’s exclusive economic zone, according to the ABC.

“We have rules, and we want everyone to adhere to those rules when it comes to freedom of navigation,” Australian Trade Minister Dan Tehan said Sunday on Sky News Television when asked about the Chinese sea presence.

The move comes amid escalating geopolitical tensions between Canberra and Beijing, which were exacerbated when Australian Prime Minister Scott Morrison called for an independent investigation into the origin of the coronavirus last year -- a move he repeated just last week.

Since Morrison’s original petition, Beijing has implemented a range of trade reprisals against Australian goods including coal, wine and barley -- measures that have been described by President Joe Biden’s administration as “economic coercion.”