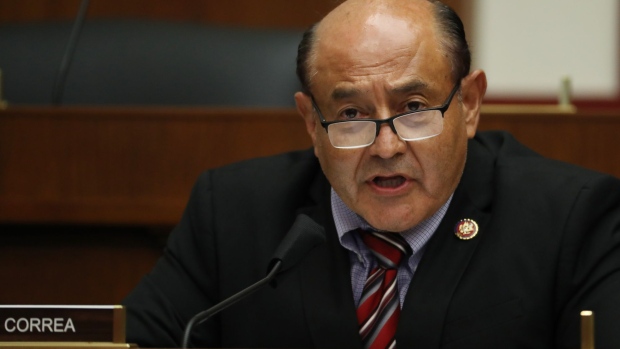 (Bloomberg) -- A second House Democrat vowed to oppose his party’s budget package unless it includes an immigration overhaul benefiting unauthorized immigrants, adding to pressure on the White House and Democratic leaders to deliver on a long-standing priority.

“I will not support any budget reconciliation deal that continues to leave hard-working undocumented taxpayers in limbo,” Democrat Lou Correa of California said in a statement Sunday. “Anything less would be fiscally irresponsible.”

Correa joins Representative Chuy Garcia of Illinois, who earlier insisted any budget deal must include a path to citizenship for unauthorized immigrants.

An increase in members adopting a hard-line approach on immigration could threaten the passage of President Joe Biden’s broader economic agenda. Democrats hold a slim 220-211 majority in the House, so they’ll need near-unanimity to pass any legislation. Several other Democrats have called for including immigration provisions, though they have stopped short of declaring it a red line.

Senate Democrats are already preparing to include immigration provisions as part of a $3.5 trillion tax and spending package they intend to tee up for later this year. It’s not yet clear what will pass muster under the Senate’s arcane budget rules, or whether all 50 Democrats can agree to specific language. The Senate parliamentarian would rule on whether those provisions sufficiently impact the federal budget.

Such bills cannot be filibustered by Republicans and therefore need just a simple majority in the Senate. That’s critical for immigration advocates who are pushing Democrats to include an overhaul, noting bipartisan talks this year haven’t gone very far.