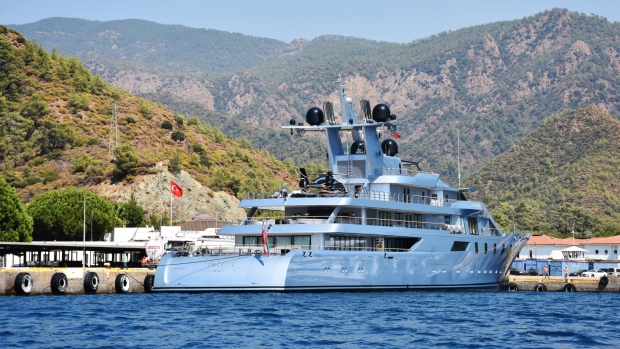 A US$150-million ultra-luxurious superyacht tied to Russia’s second-richest citizen Leonid Mikhelson, who is facing sanctions, reappeared after nearly two weeks without broadcasting its location. Its final destination is unclear.

The 85-meter (280 feet) Pacific, which can accommodate two helicopters, is cruising past Malta in the Mediterranean Sea after reappearing near the Canary Islands on May 20, when its location transponder was turned on again, vessel data compiled by Bloomberg News show. It had gone dark 12 days earlier, shortly after broadcasting that it was headed to the Bahamas, which is known to help other governments seize yachts.

The Pacific is signaling Port Said in Egypt as its next destination, having previously indicated that it was en route to Barcelona’s Port Vell. Spanish authorities have seized at least four luxury vessels connected to sanctioned oligarchs following Russia’s invasion of Ukraine. After reaching Egypt, the Pacific could possibly continue to the Maldives or Turkey, jurisdictions where other yachts linked to Russians on sanctions lists have sought refuge.

“It’s more likely that Port Said is an interim destination as it makes its way to enter the Suez Canal to get to some other location,” said Andrew Lipow, president of consulting firm Lipow Oil Associates LLC. “It’s potentially going to the Maldives or another location that’s a friendly destination for Russian megayachts.”

Russian oligarchs and tycoons are under increasing scrutiny as the war in Ukraine stretches into its fourth month. The US and UK are among countries using sanctions to punish those closest to President Vladimir Putin for the invasion. Italy, Spain and other European governments have seized villas, bank accounts and luxury cars belonging to Russia’s wealthiest citizens. More than a dozen yachts worth over US$2.25 billion have already been seized.

The seizures have sent luxury vessels racing across oceans to locales that aren’t as likely to impose or enforce sanctions. Some have logged more than 5,000 nautical miles since the start of the invasion in February. Working with Spire Global Inc., an analytics firm that uses nanosatellites to collect data, Bloomberg is tracking vessels connected to Russian tycoons on sanctions lists.

Turkey has been a popular destination for Russian megayachts, including steel billionaire Alexander Abramov’s US$100 million Titan, which traversed the Suez Canal at the beginning of May to get there. Other yachts tied to sanctioned Russians have gone dark after getting to the Maldives, including the US$300 million Ocean Victory linked to steel magnate Viktor Rashnikov. None have made Port Said their final destination.

The Pacific had been anchored at various ports and bays in Costa Rica since late January. On May 5, it departed Marina Papagayo near Culebra Bay and headed southeast, passing through the Panama Canal, according to Bloomberg data. The superyacht was cruising in the Caribbean Sea northeast of Colon when it stopped broadcasting its location on May 8, in violation of international maritime law. It had indicated it was headed to Nassau in the Bahamas.

Mikhelson, the world’s 44th-richest person with a fortune of US$26.5 billion, was sanctioned by the UK and Canada in early April. He is chief executive officer of Novatek, the largest non-state-owned natural gas provider in Russia. Novatek is also on the US sanctions list, though Mikhelson himself doesn’t face US sanctions. The billionaire owns about one-quarter of the publicly-traded company, which produces about 10 per cent of the country’s gas.

It isn’t clear whether Mikhelson is on board the Pacific. His representatives at Novatek didn’t respond to requests for comment.

The Pacific was built in 2010 by German company Luerssen Verwaltungs GmbH. It features an elevator, pool and smaller speedboat, and has room for 12 guests and 28 crew.