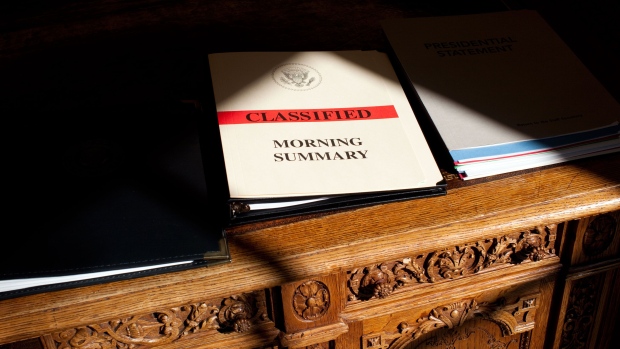 WASHINGTON - OCTOBER 5: In this handout photo provided by the White House, a classified document is framed by shadows on the Resolute Desk in the Oval Office during a meeting with Kenyan professor Wangari Maathai October 5, 2009 in Washington, D.C. (Photo by Pete Souza/The White House via Getty Images) , Photographer: Handout/Getty Images North America

Revelations that Donald Trump, Joe Biden and now Mike Pence have mishandled classified documents expose the pitfalls of trusting presidents and vice presidents to hand over the nation’s secrets appropriately when they leave office.

They also raise the question of how many more documents will be discovered in the homes of the nation’s top leaders. Trump took boxes with him to his Mar-a-Lago estate in Florida. Smaller sets of material marked classified have been uncovered in Biden’s Wilmington, Delaware, home and at the Penn Biden Center in Washington.

At the very least, the incidents underscore the need for an independent authority to review records, especially during presidential transitions.

“It’s a messed-up system,” said national security lawyer Kel McClanahan. “There should be somebody who is not the president, vice president or their staff who has the job of going through everything before they put it in a box and take it to the Penn Center or Mar-a-Lago.”

Additional documents might turn up in the coming weeks, experts said, especially considering more records are categorized as classified than ever before.

“If I am a public official who has had access to classified documents in the past, I would be calling my lawyers right now and telling them to start searching all of my stored materials immediately,” said Bradley Moss, a longtime national security expert who is following the Trump and Biden cases.

Outdated laws, the increased use of telework during the coronavirus pandemic and a “tsunami of digitally created” records are straining the Information Security Oversight Office of the National Archives, which urged modernizing the handling of classified information in a July report to the White House.

The problem isn’t just a bureaucratic headache, but a political one. The FBI in August searched Trump’s residence at Mar-a-Lago, retrieving hundreds of documents that had been marked as classified and sparking partisan bickering.

Earlier: Even Democrats Are Now Critical of Biden Over Documents Mess

The political tensions intensified in recent weeks when it became public that Biden’s attorneys had uncovered classified documents dating to his vice presidency. On Tuesday, a Pence spokesman confirmed a CNN report that the former vice president’s lawyers had found a small number of documents at his house in Indiana.

“What the hell is going on around here is my reaction,” Senator Marco Rubio of Florida, the ranking Republican on the Intelligence Committee told NBC news about the discovery of misplaced classified documents. “Look, obviously there is a systemic problem in the executive branch. Talking about two successive administrations from two different parties with officials at the top level having in their possession documents in places where they don’t belong.”

Classified documents turn up in the wrong place often, something investigators call “spillage.” Federal employees with security clearances and attorneys must immediately report any documents they find stored inappropriately, and it’s only considered a crime if they are found to have intentionally taken the documents or tried to cover up the mishandling.

McClanahan, executive director of National Security Counselors, said most cases don’t lead to criminal charges, so they never end up in the news. He recalled one client who discovered months after leaving her job that a CD with classified information on it had gotten stuck to the bottom of a folder when she was boxing up her desk.

“Spillages happen so much more than anyone ever knows,” he said.

The Pence revelation suggests that the retention of secret documents outside safe locations is  “perhaps even normal,” former federal prosecutor Kevin O’Brien said.

“It also appears that Pence, like Biden, may have inadvertently engaged in this conduct,” O’Brien said. “The contrast with Trump, who intentionally removed documents for private reasons and then misled and obstructed the government after it attempted to retrieve them, is clear.”

Senator Marsha Blackburn, a Tennessee Republican, was critical of Biden in an interview on Bloomberg Radio’s “Sound On,” and said reforms were necessary.

“You’re now looking at President Biden, as not only vice president but as a member of the Senate who ended up with classified documents,” she said. “It’s hard to imagine how someone ends up with these in their home, or not properly caring for these documents.”

“And cleaning up that process, making certain that we tighten those protocols in how the documents are viewed, when and where they’re viewed. How you sign them in, sign them out. That is an appropriate step to take,” she added. Blackburn, a member of the Senate Judiciary Committee, said she “would love” to see the panel take action this year.

--With assistance from Erik Larson and Joe Mathieu.