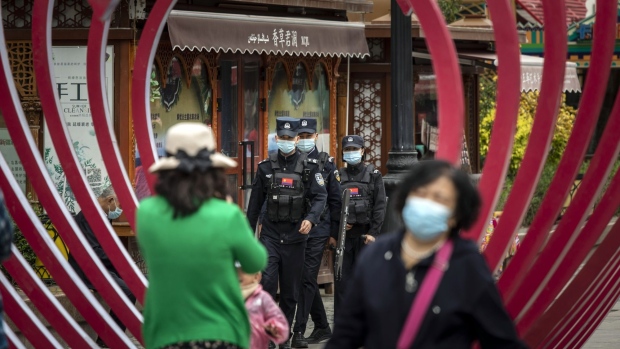 (Bloomberg) -- A secretive Communist Party organ is taking an unusually hands-on role in directing a vast predictive policing effort in Xinjiang, according to a report that unmasks Beijing’s political architecture in the far Western region.

While elsewhere in China the PLAC is a coordinating body that oversees the nation’s law and order system without significant operational capabilities, in Xinjiang the PLAC’s “budget and responsibilities” expanded markedly in recent years, the report found.

“It is a party organ as opposed to a government one and party officials in Xinjiang may have preferred for the party to directly control new surveillance technologies,” said report co-author Vicky Xiuzhong Xu, of the group that reports to China’s top executive body the Central Committee.

The report sheds light on the systems of governance powering President Xi Jinping’s crackdown in Xinjiang, where an estimated 1 million ethnic minorities, including Muslim Uyghurs, have been detained, according to a United Nations assessment. That human rights crisis has caused the U.S., U.K., European Union and Canada to sanction Chinese officials and the Biden administration to accuse Beijing of genocide.

China said the camps are “vocational education and training” centers to counter terrorism and alleviate poverty, and has called genocide accusations the “lie of the century.” Chinese state media and diplomats have attempted to discredit ASPI, which was established by the Australian government in 2001 and has disclosed funding from global defense contractors and Western diplomatic missions.

‘A Barometer of Upheaval’

The PLAC’s resurgence in Xinjiang was consistent with its role in previous mass political campaigns, the authors wrote, calling the group’s status a barometer for “political upheaval.”

Founded during during Mao Zedong’s reign, the commission was instrumental in the Great Leap Forward and Cultural Revolution, crusades that caused famine and death with the latter having been renounced by the party. The PLAC’s influence had receded in recent years after it was deemed to have amassed too much power under “Security Czar” Zhou Yongkang, who was in 2013 purged in Xi’s anti-corruption crackdown.

“The very pronounced, hands-on role the PLAC plays in Xinjiang’s repression is unsurprising given the PLAC’s tendency to rise during previous mass campaigns,” said Xu. “To many academics, the PLAC’s very existence is proof that there is no meaningful separation between the Communist Party and the Chinese government.”

Leaked police records revealed how the Xinjiang PLAC draws on its vast system of systems, the Integrated Joint Operations Platform first reported by Human Rights Watch in 2018, to identify “micro clues” such as a Uyghur receiving an overseas phone call or an unexpected visitor. The PLAC then sends “push notifications” asking neighborhood spies and law enforcement officers to open investigations that can lead to long stretches of detainment.

The surveillance doesn’t stop once a Uyghur enters a camp. In 2016, the PLAC formed a powerful body called the Counterterrorism and Stability Maintenance Command to remotely monitor at least part of the region’s sprawling network of detention camps, the report said. Zhu Hailun, former head of the region’s PLAC, in 2017 signed off on the re-education camp manual that is considered the blueprint for the strict strategy.

Since Xi ordered authorities to “strike first” against terrorists in 2014, Xinjiang has morphed into an intense surveillance state where residents have to submit to facial scans when entering markets or fuel stations, religious beards and names are banned, and traditional day-time fasting in the Muslim holy month of Ramadan is outlawed.

Beijing says it’s been closing camps as people “graduate” and a recent AP report documented a reduction in visible signs of repression, such as barbed wire fencing, armored military vehicles and towers of security cameras. Sophisticated technology including that operated by the PLAC, however, likely means overt systems of control are simply no longer required, and formal prisons in the region have been expanding.