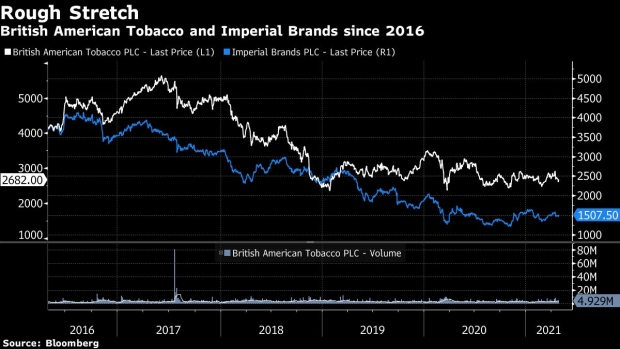 A group of cigarettes sit arranged for a photograph in London, U.K. , Bloomberg

(Bloomberg) -- It took decades for sustainable investing to become mainstream, but now every week one giant investor after another announces their commitment to ESG.

Kenneth Dart will not be joining that club.

The billionaire is heir to a plastic cup fortune. More than two decades ago he renounced his U.S. citizenship and moved to the Caribbean, becoming the biggest real estate owner in the Cayman Islands. For years he invested in distressed sovereign debt with Argentina’s former President Cristina Kirchner calling him a “vulture.”

And over the past six months Dart, 66, has quietly accumulated one of the classic sin investments. Through a Cayman Islands vehicle called Spring Mountain Investments, Dart has built a 7% stake in British American Tobacco that’s now worth $6 billion. Last month, Spring Mountain disclosed a separate $634 million position in rival Imperial Brands. The Financial Times first reported the firm’s tobacco investments.

A small portion of the positions were entered into using total return swaps, the filings show. These types of swaps were at the center of the March implosion of family office Archegos Capital Management, causing billions in bank losses.

Spring Mountain is the latest in a series of entities the publicity-shy Dart has used to buy securities. He previously set up Portfolio Services Ltd., Seneca Investments, EM Ltd., Eastern Capital and LBS Investments. In recent years these have been used to invest in obscure biotechnology stocks that make up a fraction of his fortune, estimated at $6.6 billion by the Bloomberg Billionaires Index.

Dart’s tobacco wager goes against one of the hottest trends in finance: Investing in companies that focus on environmental, social and governance factors, which in theory means corporations have long-term sustainable prospects.

The tobacco industry has for decades been the antithesis of ESG investment. Dominated by a few corporate behemoths, the companies operate in a market at risk of being quashed by regulation or customers giving up -- or dying from -- the habit.

Michael Bloomberg, founder and majority owner of Bloomberg News parent Bloomberg LP, has been a longtime champion of tobacco-control efforts.

While a larger group of investors are shunning the stocks, it can create opportunities for those less concerned with the societal outcomes of their portfolio.

Tobacco stocks “were a one-way ticket up until around 2016” before concerns about new regulation, especially in the U.S., began discouraging investors, according to Bloomberg Intelligence analyst Duncan Fox.

Over the past five years, the MSCI World Tobacco Index has dropped 32%. That’s punished long-term holders, but has juiced the dividends the stocks pay. British American Tobacco and Imperial Brands have dividend yields exceeding 8%.

Investors may also be overstating the regulatory risks -- after all the firms have experience adapting to and profiting under new regulations --and there’s potential growth in alternative tobacco products and the new cannabis markets, Fox said.

Still, there’s a reason why so many investors shun the stocks.

“Smoking has been in decline for the past five decades because of what we call the ESG Squeeze: pressures from societal attitudes, regulation, and taxation,” Citigroup Inc. analyst Adam Spielman wrote in March. In 10 to 20 years there could be no smokers left in many markets, according to Jefferies analyst Owen Bennett.

Read more: Smoking may disappear within a generation, analysts predict

Dart has made successful contrarian bets in the past. He made billions from companies such as Salomon Inc., Federal Home Loan Mortgage Corp., and in troubled sovereign debt, according to a 1995 Businessweek profile.

Trained as a chemical engineer, he’s long been focused on his investment portfolio instead of the family business, Dart Container, where he no longer has a role or ownership. Mason, Michigan-based Dart Container is run by his brother, Robert Dart.

In recent years Dart’s focus seemed to shift from markets to property development, primarily in the Cayman Islands, where he’s made his home. Dart Real Estate has developed $1.5 billion in projects, including hotels, office buildings and residential complexes, according to its website.