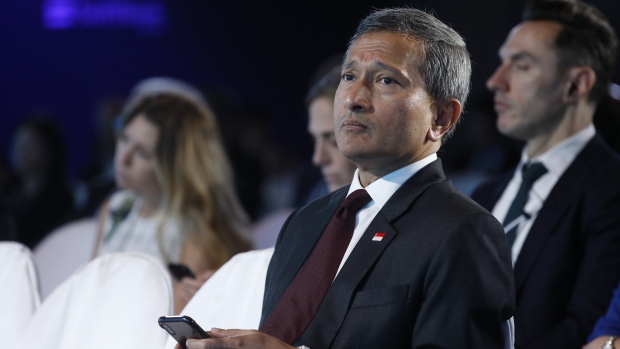 (EDITORS NOTE: Image was created using a variable planed lens.) The Fullerton Hotel, center right, and commercial buildings standing in the central business district, left, are illuminated at dusk in Singapore, on Wednesday, June 13, 2018. Tourism as well as the consumer sector will likely see a lift thanks to the influx of international media at the recent DPRK-USA Summit, according to RHB Research Institute Singapore Pte. Photographer: Brent Lewin/Bloomberg , Bloomberg

(Bloomberg) -- Recent security breaches, including one where details of HIV patients were leaked, won’t hold back Singapore’s efforts in testing and investing in the latest technology to build what it termed as a “Smart Nation.”

“We cannot go back to pen and paper,” said Vivian Balakrishnan, the Singapore minister tasked with transforming the city-state into a Smart Nation. “If people lose confidence in the integrity and security of the system, then all these aspirations cannot be fulfilled.”

The government’s response to these cybersecurity attacks and human leaks has to be one where it’s completely open, along with corrective measures it would take, Balakrishnan said in an interview in San Francisco, where he’s attending Singapore-run tech conferences and visiting tech companies. He is also the island’s foreign affairs minister.

The next wave of development in Singapore’s tech efforts will be artificial intelligence or AI -- which the minister says has seen a “revolution” in the past two to three years. Machines have evolved from just learning rules to adopting pattern recognition, he said. The government will train the workforce with AI, starting with civil servants, Balakrishnan said.

“The ability to deploy AI in our respective fields should be commoditized,” he said. “We will be one of the earliest adopters of these new technologies.”

The earlier phase of the tech effort has pushed more Singapore residents to use apps on mobile devices for payments and other transactions. An app was even created to pay -- and extend -- parking fees remotely from phones. These so-called e-transactions have now overtaken ATM withdrawals, he said.

Some new developments include:

To contact the reporter on this story: Linus Chua in San Francisco at lchua@bloomberg.net