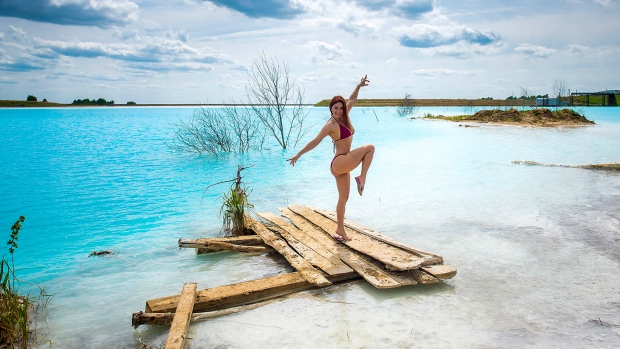 In this undated handout photo taken by mrwed54, a woman poses for a photo by a lake in the Siberian city of Novosibirsk, about 2,800 kilometers (1,750 miles) east of Moscow, Russia. , The Canadian Press

A rush by residents of the Russian city of Novosibirsk to snap selfies in and around a nearby toxic reservoir dubbed the ‘Siberian Maldives’ has prompted the power company that uses it as a dump to set up a 24-hour guard.

The now turquoise waters of the artificial lake, which contains chemical ash residue from a coal-generated power station, have attracted thousands of locals who’ve been posting their photographs on Instagram and other social media, fueled by media coverage of the phenomenon.

Inhabitants of the 1.6-million-strong city, the third largest in Russia, in some cases have hired professional photographers for wedding shoots and others have come on organized tours, the Kommersant newspaper reported on Saturday. Even though the water is harmful to the skin and can cause severe rashes, some people have entered the reservoir.

The craze started after a local photographer posted a picture of a woman next to the picturesque-seeming lake. One Novosibirsk resident who gave his name as Georgy told Kommersant he saw about 80 people there when he visited recently. “Doesn’t seem like a good idea to swim there,” he said. “I still need my skin.”

The Siberian Generating Company, which runs the facility, barred access on the main road leading to the dump but people didn’t stop flocking to the site, Kommersant said. The company on Friday announced it would post security around the clock starting from July 12 to prevent trespassers.