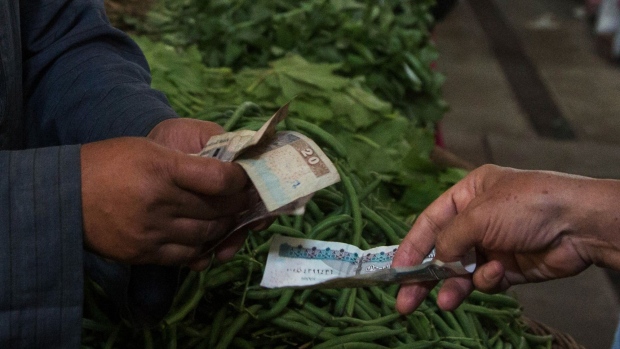 A customer exchanges Egyptian pound banknotes with a vendor at the Al-Manhal market in the Nasr city district of Cairo, Egypt, on Wednesday, June 1, 2022. Global food prices are soaring near the fastest pace ever as Russia’s invasion of Ukraine chokes crop supplies, with Egypt, the world’s biggest wheat buyer, now grappling with higher import bills as the conflict causes a run-up in grain and energy costs. Photographer: Islam Safwat/Bloomberg , Bloomberg

(Bloomberg) -- Investors are bidding down Egypt’s currency by offering to sell it an all-time low level against the dollar.

The pound’s exchange rate was quoted at 19.5383 against the dollar on Monday, surpassing the level of 19.5186 reached in December 2016 following a devaluation that year, according to data from the Egyptian central bank.

Egypt’s tilt toward a more flexible exchange rate has emboldened market participants to intensify pressure on a currency that remains expensive even after a 15% devaluation in March. It’s also getting increasingly caught up in a selloff of risk assets that deepened last week and stoked a surge in the dollar amid fears that heightened inflation would push interest rates higher and ignite a global recession.

The dollar’s rally has weighed on the currencies of Egypt’s trading partners and other developing peers. The Egyptian pound is on track for a seventh month of declines in September, its worst streak since 2013.

The nation is hopeful it can reach at least a staff-level agreement on International Monetary Fund assistance in the fourth quarter as it grapples with the economic fallout from Russia’s invasion of Ukraine. The Washington-based lender favors a more flexible exchange rate, and derivatives traders have been stepping up bets for a further depreciation.

Last week, Egypt’s central bank surprised most economists by refraining from a rate hike. Instead, it opted to raise the reserve ratios for lenders, an indirect form of tightening.

Policy makers are “now seemingly leaning towards a dovish stance,” Naeem Brokerage said in a report.

“The move could now be indicative of a lower probability of a sharp devaluation scenario, unless accompanied by other subsequent measures in the upcoming days or weeks,” Naeem’s analysts said.