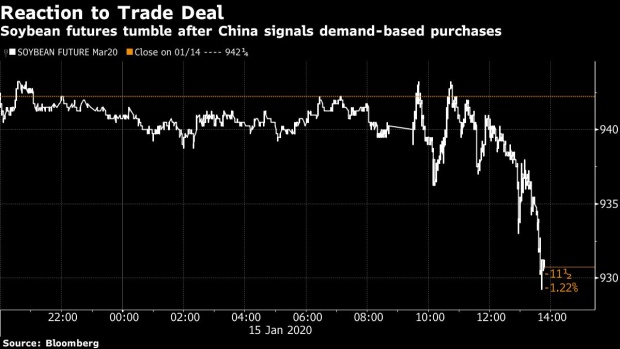 (Bloomberg) -- The U.S. and China signed a partial trade deal that confirms a cease-fire in the spat that has roiled financial markets for three years.

While the broad terms of the 94-page agreement have been known since last year’s handshake deal, the text brought some clarity to markets that remained on edge. Credit card stocks, for example, were among the biggest gainers after the likes of Visa and Mastercard moved a step closer to gaining access to China’s $27 trillion payments market.

Commodity markets got some numbers on China’s commitments to buy agricultural products, but doubts remain. Currency traders assessed the section that reaffirmed existing G-20 commitments, and investors in tech stocks pored over details on intellectual property concessions. Here’s a round-up of how Wall Street reacted to the signing:

U.S. stocks powered to fresh highs, only to pare the gains as President Donald Trump held forth for over an hour before signing the deal. The S&P 500 was higher by 0.1% as of 3:16 p.m. in New York.

“It only modestly moves the needle in the right direction,” David Sowerby, portfolio manager at Ancora Advisors said. “It’s maybe best described as a semi-truce. It removes some level of uncertainty that existed before.”

“This is going to be a pretty forgettable event because we’ll be so focused on the next economic report, the next earnings report,” said Jim Paulsen, chief investment strategist at the Leuthold Group. “This is not a temporary crisis or issue and now it’s over. Everyone’s gotten used to the fact that this is a chronic issue.”

Within the equity market, U.S. credit card companies emerged as winners amid signals the path to Chinese customers may be easing. China said it won’t take longer than 90 days to consider applications from providers of electronic-payments services. It’s a positive sign for U.S. firms that have been trying to gain access to mainland China.

The yuan rose to the strongest since July ahead of the signing and was little changed in the wake of it, as investors doubted the deal provided any real mechanism to enforce currency provisions.

“It still remains to be seen on enforcement of the exchange rate component and the deal overall,” Torsten Slok, chief economist at Deutsche Bank AG, said. “So we have to stay tuned with regard to the yuan.”

“The pact seems to contain nothing that would keep the U.S. Treasury from labeling China as a manipulator again in the future,” said John Velis, a strategist at Bank of New York Mellon. “The lack of detail on enforcement could also be a source of volatility.”

The foreign-exchange part of the U.S.-China trade agreement provides “nothing new on disclosure” and “that’s disappointing,” said Brad Setser, who worked at the U.S. Treasury during President Barack Obama’s administration and is now at the Council on Foreign Relations. “If there is any real substance to this deal, it isn’t in the text but rather an informal commitment by China not to guide the yuan down from its already depreciated levels versus the dollar so long as the truce holds.”

Chipmakers fell Wednesday. The group had been among the most sensitive to any trade-related headlines, from tariffs to steps to thwart China’s Huawei Technologies Co. The U.S. signaled on Tuesday that Huawei remains in its sights.

“Tech remains an issue,” Dave Lutz, managing director of JonesTrading, said. Semiconductors are “at ground zero for that. Huawei looms. We act against Huawei, and that’s probably not going to help sentiment in Semis.”

U.S. farmers bore the brunt of China’s retaliation during the three-year spat, and Trump sought to secure increased levels of purchase commitments from China. The deal indicated China will step up purchases of agricultural goods, but the nation said it would do so according to demand. Soybean prices slumped.

“The Chinese will buy according to their need, but they’ll need a lot, make no mistake about it,” said Sal Gilbertie, president and co-founder of Teucrium Trading. “The markets may have been anticipating an immediate burst of buying but this is more of a buy-the-rumor, sell-the-fact.”

The deal did little to alter views on emerging-market assets, which have been rallying since last year’s detente in the trade war amid expectations for a pickup in global demand.

“It’s all baked in the cake,” Sacha Tihanyi, deputy head of emerging-markets strategy at TD Securities in New York said. With continued tariffs and little urgency for a phase-two deal, “there’s probably more risk of downside surprises on the trade front with China than upside. It puts a stamp on what the markets moved on already.”

Looking Ahead to Phase Two

Trump said negotiations of the next phase will begin immediately, and investors remained on edge over whether that could entail fresh tariffs or raise other uncertainties for businesses and investors. For now, those talks look set to start on a good footing.

“The implication is that at least it sets a better mood, whether it gets done,” Donald Selkin, chief market strategist at Newbridge Securities Corp., said. “At least it sets a framework perhaps for a better tone going into stage two but there’s a lot of uncertainty. There’s a lot in phase one that is not as clear as it’s supposed to be.”

“It’s a real positive,” said Matt Forester, chief investment officer at BNY Mellon Lockwood Advisors. “There are pieces to the agreement that maybe were not expected in the markets especially around intellectual property and technology transfer. Now the question is going to be whether they will actually be able to reach purchase commitments. But that there is an agreement to try reach those is a good thing.”

To contact the editor responsible for this story: Jeremy Herron at jherron8@bloomberg.net