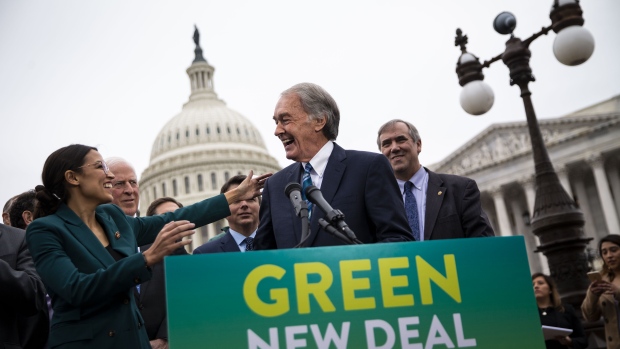 The Senate blocked Democrats’ Green New Deal, as Majority Leader Mitch McConnell attempted to force the party’s presidential contenders into an embarrassing vote over a far-reaching and costly climate-change proposal that Republicans say voters will oppose.

The vote Tuesday was 0-57, with most Democrats voting “present” to sidestep the GOP maneuver and buy time to build their campaign positions.

The vote is just the first step by Republicans to put the Green New Deal in the spotlight. The proposal -- mostly a collection of goals for mitigating climate change rather than a fully formed plan of action -- has been a favorite target for criticism by McConnell and Republicans since freshman Representative Alexandria Ocasio-Cortez of New York and Senator Ed Markey of Massachusetts rolled it out in February.

“I could not be more glad that the American people will have the opportunity to learn precisely where each one of their senators stand on this radical, top-down, socialist makeover of the entire U.S. economy,” McConnell, a Kentucky Republican, said before the vote.

President Donald Trump met Tuesday with Senate Republicans at the Capitol, and Senator Lindsey Graham, a South Carolina Republican, said afterward the president told them regarding the Green New Deal, “make sure you don’t kill it too much because I want to run against it” in 2020.

The resolution, S.J.Res. 8, is co-sponsored by more than 100 congressional Democrats, including the six senators running for president. While Democrats are united on the need for significant action to stem climate change, they don’t agree on specific proposals.

Senate Minority Leader Chuck Schumer of New York worked to shield Democrats having to expose splits between moderates and progressives on the issue. He dismissed the vote as “gotcha politics” intended by Republicans to distract from the fact that they don’t have their own plan to curb greenhouse gas emissions.

“Republicans want to force this political stunt to distract from the fact that they neither have a plan nor a sense of urgency to deal with the threat of climate change,” he said.

In the House, majority Democrats plan to introduce a resolution this week that calls for the U.S. to remain part of the Paris Climate Accord and requires the Trump administration to create a plan to meet its emission reduction goal, according to a senior Democratic aide.

Trump gave notice in 2017 that he intends to pull out of the agreement, under which the U.S. pledged to reduce greenhouse gas emissions by at least 26 per cent from 2005 levels by 2025.

Senate Democrats weren’t under any real pressure from outside progressive groups to vote for the Green New Deal at this point.

Adam Green, a co-founder of the grassroots Progressive Change Campaign Committee, said McConnell was trying to force some “no” votes at a time when Democrats are still reviewing the plan. Voting “present” shows that Democrats aren’t going to hamper things with an early dissent, he said.

“‘Present’ is saying this is a credible enough concept that we’re not going to undermine it,” Green said.

McConnell is following a long Senate tradition by holding a doomed-to-fail show vote that forces the minority party to take a stand on its own controversial proposal.

Former Majority Leader Harry Reid, a Nevada Democrat, used the tactic in 2011 when he forced Republicans to vote on a Medicare voucher program proposed by Wisconsin Republican Paul Ryan, then the House Budget Committee chairman. That vote fueled Democrats’ messaging strategy in the 2012 elections, when they expanded their majority by two seats.

McConnell on occasion forced votes on President Barack Obama’s budget proposals, with no senator voting for them.

The challenge for Democrats looking ahead to next year’s campaigns is to avoid having their support for a still-evolving climate proposal tarred by Republican efforts to portray it as an extremist agenda that would do away with hamburgers and airplane travel.

“It’s one thing to be on the campaign trail and say here is what I believe in and fill in the details,” said Democratic strategist Rodell Mollineau, a former top aide to Reid. “It’s another thing to go on record and let other people fill in the details for you.”

At this point, the Democratic presidential contenders generally haven’t spelled out specific proposals. Senator Cory Booker of New Jersey has called the Green New Deal “bold,” and Senator Kamala Harris of California has said it’s “an investment” worth the cost. Senator Amy Klobuchar of Minnesota described it somewhat less enthusiastically, as an “aspiration” to act on climate change.

“I am for a jump-start of the discussion and a framework as Senator Markey has described -- I am not for reducing air travel,” Klobuchar said on Fox News. “We just need to start as a country seeing it as aspiration to do better than we’re doing now.”

The GOP’s message focuses on the botched February rollout of the proposal, which included the release of documents from Ocasio-Cortez’s office promising economic security even for those “unwilling to work,” and suggesting the eventual elimination of air travel and “farting cows.”

McConnell has accused Democrats of wanting to ban “anything with a motor that runs on gasoline” and embracing “garden variety 20th century socialism” at a cost of tens of trillions of dollars.

“This dangerous fantasy would burn through the American people’s money before it even got off the launch pad, but the cost to the Treasury is just the beginning,” McConnell said on the Senate floor this month. “It’s hard to put a price tag on ripping away the jobs and livelihoods of literally millions of Americans.”

In addition to establishing a “net zero” goal for greenhouse gas emissions, the proposal by Ocasio-Cortez and Markey says it would create “millions of good, high-wage jobs and ensure prosperity and economic security for all people of the United States.”

Senate Democrats including New York’s Kirsten Gillibrand, another presidential candidate, and Markey appeared at a Green New Deal rally with environmentalists outside the Capitol before the Senate vote, expressing confidence that 2020 voters will support action on the issue.

“Republicans continue to ignore climate change at their political peril,” Markey said. “They will pay a price at the ballot box in 2020.”