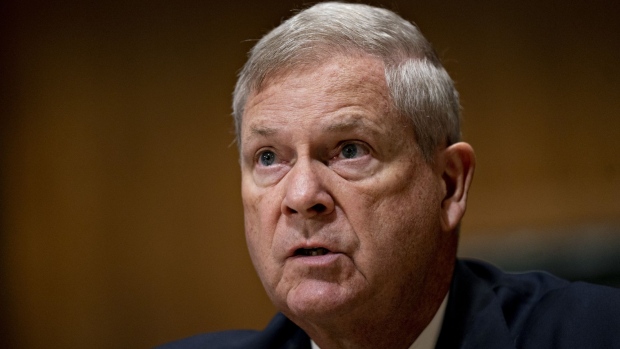 (Bloomberg) -- The Senate confirmed Tom Vilsack as U.S. Agriculture Secretary, opening the way for the Biden administration to move forward with a farm agenda emphasizing climate change, equity for minority farmers and more food assistance for the poor.

Vilsack, well-known in Washington and the agriculture industry after serving eight years in the post under President Barack Obama, was confirmed 92-7 Tuesday after less than 15 minutes of debate in the Senate. He was confirmed despite some criticism from progressive groups and minority farm advocates that he wasn’t aggressive enough in aiding Black farmers during the Obama administration and is too close to agribusiness interests.

Vilsack, 70, stressed voluntary incentives to farmers to adopt more climate-friendly practices in his confirmation hearings and while campaigning on behalf of Biden during the presidential election campaign. Biden set a goal during the campaign for the U.S. to be the first country to cut its agriculture sector’s net greenhouse gas emissions to zero.

Robert Bonnie, a senior climate adviser to the Biden USDA, suggested during the transition rapid funding for a so-called carbon bank that would pay farmers, foresters and ranchers for practices that sequester carbon. Bonnie said a U.S. Agriculture Department forum last week that he anticipates the department will issue a report on climate policy in about 75 days.

The Biden USDA has embraced legislation proposed by newly elected Democratic Senator Raphael Warnock of Georgia to include $5 billion for Black, Hispanic and Native American farmers in the $1.9 trillion Covid relief package. The funding would include $4 billion to help minority farmers pay off USDA loans and $1 billion to address systemic racism at the USDA.

Vilsack pledged during his confirmation hearings to “root out” a legacy of racism at the department, which settled a series of class-action lawsuits for discriminating against minority farmers in loan and aid programs over decades.

Biden disappointed some minority farming advocates in choosing Vilsack to run the department over House Agriculture Committee member Marcia Fudge, who openly campaigned to be the first Black woman to lead the department. Fudge was instead chosen as secretary for housing and urban development, a post that has often gone to minorities.

Biden has since moved to name minorities to key positions at USDA, including Virgina state agriculture commissioner Jewel Bronaugh to be the first Black woman to hold the department’s No. 2 position.

Vilsack has faced lingering bitterness for his role in the 2010 ouster of Shirley Sherrod, a Black woman who was then the USDA’s Georgia state director of rural development, after a conservative blogger posted an edited video of her purportedly expressing racist views. When an unedited video of the speech later surfaced verifying her claim that she was telling a story of racial healing, Vilsack offered to re-hire her but she declined.

The Biden administration also is seeking to extend a 15% increase in food stamp benefits, administered by the USDA, as part of its Covid relief package.

Vilsack will also have leeway to determine how to distribute some of the remaining farm aid included in previous Covid relief measures. The department suspended a $2.28 billion tranche of farm aid Trump authorized on his last full day in office so Vilsack could review the program and indicated the agency would soon announce additional relief measures for farmers.

Vilsack, a former governor of Iowa, a farm state which leads the nation in corn and hog production, has long ties to Biden going back to an endorsement in Biden’s short-lived first presidential campaign in 1987. He became president and chief executive officer of the U.S. Dairy Export Council after serving as Obama’s agriculture secretary.