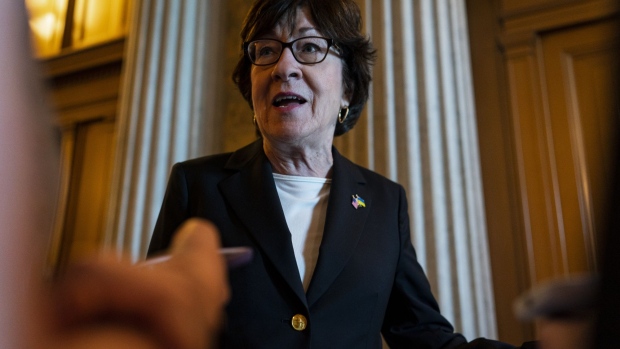 (Bloomberg) -- Senate Democrats are working to build Republican support to codify-same sex marriage and extend protections to all married couples, a remarkable generational shift on LGBTQ issues even as the two parties battle on abortion, guns and other social issues.

Majority Leader Chuck Schumer said Wednesday he “fully and strongly” supports the Respect for Marriage Act, which passed the House Tuesday with 47 Republican joining all Democrats in support. He is working with Democrat Tammy Baldwin of Wisconsin, one of the Senate sponsors of the bill, to help line up support from at least 10 Republicans whose votes would be needed if all Democrats in the chamber support the legislation.

“I want to bring this bill to the floor, and we’re working to get the necessary Republican support,” Schumer said.

Senator Susan Collins, a Maine Republican, is a co-sponsor of the bill and Senator Rob Portman, an Ohio Republican, also will co-sponsor the legislation, his office confirmed on Wednesday.

Senator John Thune of South Dakota, a member of GOP leadership, said it’s possible the bill could get enough Republican votes to pass. Thune added that he does not expect GOP leaders to pressure their caucus to vote one way or another on the legislation.

“My guess is on something like that it’s probably a vote of conscience,” he said.

The House legislation, passed with a 267-157 vote, repealed the Defense of Marriage Act, which defined marriage for federal purposes as between a man and a woman and allowed states to refuse to recognize same-sex marriages legally established in other states. It had passed the House with an overwhelming 324-67 bipartisan majority and was signed into law in September 1996 by then-President Bill Clinton,

The current bill would federally recognize same-sex marriages and ensure benefits for all married couples. It also requires that all states recognize public acts, records and judicial proceedings for out-of-state marriages and gives the Justice Department the power to enforce the law.

In 2013, the Supreme Court ruled in United States v. Windsor that the federal government cannot discriminate against married same-sex couples when determining benefits and protections. And the court’s 2015 ruling in Obergefell v. Hodges determined that state bans and refusal to recognize same-sex marriages are unconstitutional.

But some Democrats raised concerns that the current conservative-leaning Supreme Court could overturn the 2015 ruling after it overturned the 1973 Roe v. Wade ruling establishing a constitutional right to abortion.

In a concurring opinion, Supreme Court Justice Clarence Thomas wrote the court should review other “due process precedents” including the ruling in Obergefell v. Hodges.