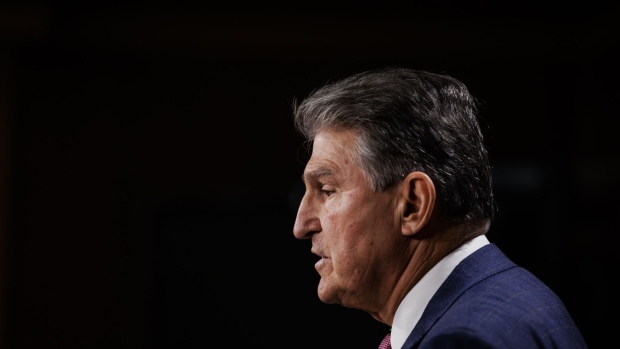 Senator Joe Manchin, a Democrat from West Virginia, speaks during a news conference at the U.S. Capitol in Washington, D.C., U.S., on Monday, Nov. 1, 2021. Manchin said Congress needs more time to assess the impact of President Biden's $1.75 trillion tax and spending package on the economy and the national debt, a severe setback to any chances of quick action on the plan. , Bloomberg

(Bloomberg) -- Senate Democrats are working on shrinking the tax increases in President Joe Biden’s economic package as part of a bid to cut a deal with Senator Joe Manchin and get it passed in the coming weeks, according to people familiar with the talks.

The changes under consideration would pare down some of the tax measures passed by the House last year, and could mean that both US corporations and wealthy households end facing smaller tax hikes than Biden and Democrats initially envisioned, the people said.

The discussions about making the tax elements of the package more business friendly come as Senate Majority Leader Chuck Schumer and Manchin, a West Virginia Democrat whose vote is critical for the deal to pass in the 50-50 Senate, are close to agreeing that the overall plan will be roughly $1 trillion, according to the people, who asked to remain anonymous because the talks are private.

Half of the amount would be for new spending and the other half of the tax increases to cut the deficit by $500 billion over ten years.

The talks remain tentative and neither side has fully signed off on the outline.

The decision to keep the topline figure for the legislation at or below $1 trillion means that the Senate will make substantial cuts to the $1.5 trillion package of tax hikes that passed the House last year. That gives them the freedom to revise some of the most controversial elements of the plan to make them more palatable to critics. Democrats also plan to use savings from a prescription drug plan to offset some of the costs.

The Senate Finance Committee is close to finalizing language to soften a measure in the 15% global minimum levy, which would allow corporations to blend their overseas tax payments to meet the minimum threshold, rather than requiring that level to be met in each country in which the company operates, the people said.

The Finance Committee is also considering a change to the 15% domestic minimum tax on financial profits, also known as the book tax, that would exclude a business’s deductions for the investments they make when calculating the tax, the people said. This would mean that many companies would face lower IRS bills from the book tax.

Business groups are also pushing Democrats to exclude income from pass-through businesses, such as partnerships or LLCs, from being subject to a surtax for high earners. The House legislation calls for a 5% levy on incomes above $10 million and an additional 3% on incomes above $25 million. The current top tax rate for that income is 37%.

A spokesperson for Manchin declined to comment. Representatives of Schumer and the Senate Finance Committee didn’t immediately respond to requests for comment.

The $1 trillion maximum amount is also likely to serve as a reality check for Biden and his allies in Congress. Senate Democrats, who will have to pass the legislation without Republican votes, have been told in recent weeks not to expect a grand package and that it was being narrowed down, according to a person familiar.

With Manchin’s demand for half of the total topline to go to deficit reduction, that gives a maximum of $500 billion for new spending, roughly a quarter of the size of the $2.2 trillion bill that passed the House last year. Schumer and Manchin, who have been engaged in secretive talks for two months about a scaled-back version of Biden’s signature Build Back Better agenda, have yet to come to agreement the specifics of what to include.

Democrats have until the end of September to pass the bill before the budget resolution that allows them to advance the bill with a simple majority expires. However, many Democrats believe the bill needs to pass in the next month before the August recess.

A late sticking point has been whether to extend Obamacare premium subsidies, set out in the 2021 pandemic relief package and due to expire at the beginning of 2023. The notices of the increased premiums are to go out in October just before the election and many Democrats say allowing that would be midterm election malpractice. Including the roughly $200 billion ACA premiums in a $500 billion spending package would entail scaling back the $550 billion climate provisions from the House bill.

In recent weeks, Manchin and Schumer also have been haggling over remaining energy and climate sticking points, including whether direct pay to clean energy developers, which Manchin opposes, should be included. Other remaining areas of negotiation include details on a tax credit for electric vehicles including the value and eligibility requirements.

Manchin is also seeking to make the package more friendly to fossil fuels, efforts sure to draw the ire of progressive lawmakers and environmental groups. That includes a proposed tax credit for carbon capture that’s seen as extending the life of coal plants, and increasing drilling in the western Gulf of Mexico. Manchin also wants to increase the duration of a tax credit for so-called blue hydrogen made from natural gas.

A compromise deal to place a fee on the emission of methane from oil and gas operations is expected to be included in the package, Senator Tom Carper, the Chairman of the Senate Environment and Public Works Committee, said in an interview last week.