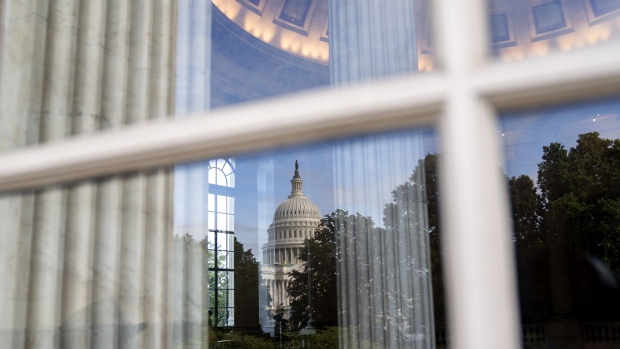 The U.S. Capitol is reflected in a window of the Russell Senate Office building in Washington, D.C., U.S., on Friday, June 25, 2021. The White House scored a political win by sealing a $579 billion infrastructure deal with a group of Democratic and Republican senators, yet the bipartisan plan faces hurdles in Congress that reflect challenges to his broader economic agenda. Photographer: Stefani Reynolds/Bloomberg , Bloomberg

(Bloomberg) -- The senators negotiating a $550 billion infrastructure package finished the text of their legislation Sunday, ramping up a Senate debate that will lead to likely passage this week.

Senate Majority Leader Chuck Schumer said the chamber could wrap up work on the bipartisan bill “in a matter of days.” Final congressional action, however, won’t come until after the House returns from a recess in September.

The legislation marks the biggest infusion of U.S. federal spending on infrastructure in decades, including about $110 billion in new spending for roads and bridges, $73 billion of electric grid upgrades, $66 billion for rail and Amtrak, and $65 billion for broadband expansion. It also provides $55 billion for clean drinking water and $39 billion for transit.