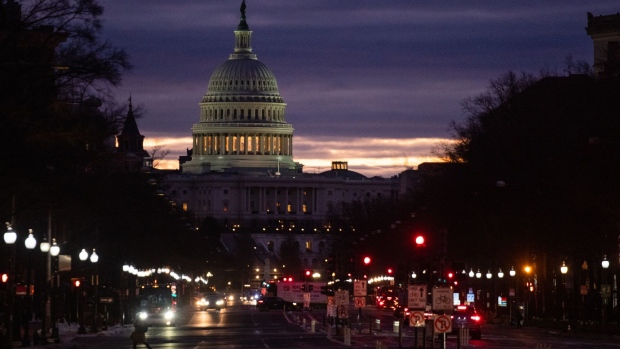 (Bloomberg) -- Senate Republicans again blocked legislation designed to expand voter participation and restore some protections from the landmark 1965 Voting Rights Act, touching off an unusual and likely doomed effort by Democrats to alter Senate filibuster rules to usher it through.

In a Senate evenly split between the two parties, all 50 Republicans opposed advancing the legislation to a final vote, leaving the bill well short of the 60-vote threshold needed.

The vote dashes Democrats’ prospects of fulfilling a key promise made before they won control of the White House and Congress by the slimmest of margins in the 2020 election. It now adds to a list of stalled agenda items that will dog the party’s candidates in November, when control of the House and Senate will be on the ballot.

Senate Majority Leader Chuck Schumer said he’ll move next to make a one-time change to Senate filibuster rules to clear a way for passage of the voting rights legislation. But he lacks support within his party to do so. Democratic Senators Joe Manchin of West Virginia and Kyrsten Sinema of Arizona, while backing the voting legislation, have defended the filibuster and said they don’t support using the so-called nuclear option to change Senate rules with just a simple majority rather than the usual 67.

Schumer plans to propose switching to a “talking filibuster” for the bill. Under that scenario, the legislation could move to a final vote after every senator has exhausted their right to speak on the matter twice on the floor. On Wednesday, he urged senators to consider how the filibuster has been repeatedly used for decades to block civil rights legislation.

A talking filibuster “would be the first step towards passing voting rights, restoring the body, and breaking the gridlock that we now face on this vital issue,” he said. “In this body, proponents of our democratic rights again and again have brought legislation to the floor, only to be met by a filibuster.”

Democrats say the legislation would help counter laws passed by GOP-led legislatures last year that critics say aim to curtail ballot access for minorities and other Democratic-leaning voters. Republicans say such claims are exaggerated. They argued the Democrats’ legislation was initially drafted in 2019 and is geared toward disadvantaging Republicans in future elections.

Senate GOP leader Mitch McConnell said Democrats are creating a “fake panic” on voting rights to enact “a sprawling takeover of our entire political system.” Senator John Thune of South Dakota, the No. 2 Republican leader, said efforts to change the filibuster will alter the Senate irrevocably by dashing the need for bipartisanship.

If Democrats change the rules “then all bets are off,” Thune said. “Then the Senate becomes the House of Representatives, and policy changes every two years or every four years, defending who’s in power, and there’s no stability, no predictability, there’s no moderation and no incentive for this body to work together across the aisle.”

The voting rights legislation at issue entails two bills that Democrats combined into a single bill passed by the House last week -- an approach that allowed Schumer to bring it up without the threat of an initial GOP filibuster.

A Democratic defeat on the legislation comes on the heels of a stalled debate on President Joe Biden’s economic agenda. Last year, other Democratic agenda items fell by the wayside, including policing reforms, a pathway to citizenship for undocumented immigrants, a higher minimum wage and new gun controls. Republicans blocked the voting rights legislation shortly after Biden held a wide-ranging news conference to discuss his first year in office and the path forward into 2022, when control of the House and Senate are at stake in midterm elections.

Biden last week acknowledged his drive for voting-rights legislation could be doomed after Sinema and Manchin reaffirmed their opposition to changing filibuster rules to allow the bill to move forward with a simple majority.

After meeting privately with Senate Democrats, the president said while he hoped lawmakers would advance the measure, “the honest-to-God answer is: I don’t know if we can get this done.”