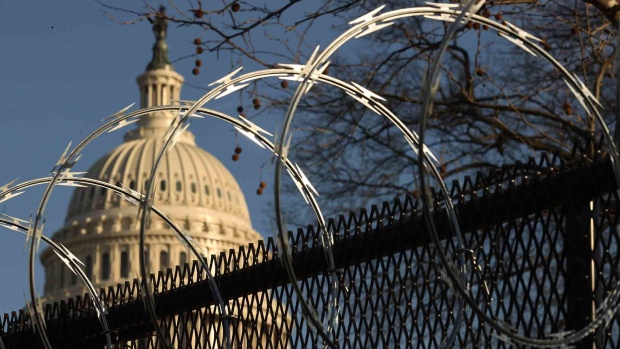 (Bloomberg) -- The Senate passed an emergency $2.1 billion spending bill Thursday to cover costs associated with defending the Capitol in the wake of the Jan. 6 pro-Trump riot and to grant immigrant visas to Afghans who aided the U.S. during the war in Afghanistan.

The bill, which passed on an 98 to 0 vote, now heads to the House. Funding shortfalls and the prospect of Afghan allies being executed by the Taliban as it claims territory in the country are driving quick action. In addition, the National Guard will need to start training cutbacks in August and the Capitol Police faces furloughs unless the legislation clears Congress this week.

”We must support those who supported us,” Senate Appropriations Chairman Patrick Leahy, the bill’s sponsor, said. “That is not just a political or economic responsibility. That is a moral responsibility.”

The House in May passed a $2 billion bill focused on Capitol security upgrades, including fencing and a rapid reaction force not funded in the Senate bill, as well as worker bonuses. House Speaker Nancy Pelosi said Thursday the House would take up the Senate bill “as soon as they finish.”

With the House set to leave Washington for recess Friday until Sept. 20, Democrats would likely be forced to have lawmakers return during their break unless they pass the Senate bill. Leahy said he expects the House will ultimately approve the Senate’s version, which would send the legislation to President Joe Biden’s desk. The Biden administration supports the Senate passage.

The Senate bill includes more than $500 million for the National Guard, $100 million for Capitol Police and $300 million for new security measures at the Capitol. In addition, it has more than $1 billion in funding through the Defense, State and Health and Human Services Departments to help pay the costs of resettling Afghans. It also makes 8,000 visas available to those Afghans, an addition to the 4,000 special immigrant visas available in the current fiscal year. The State Department has issued 26,500 such visas since 2014.

The Senate vote came about after GOP leaders dealt with a temporary blockade of the bill by seven Republicans, some relating to the cost and others to the expansion of visas.

Republicans lifted their hold on the bill after Arkansas Senator Tom Cotton, an immigration hardliner who served in Afghanistan, secured a reporting requirement on Afghan visas and the Senate took a procedural vote related to waiving budget rules.

Passage of the bill comes the same week as the first hearing of a House special committee on the insurrection, in which police officers described fearing for their lives in the assault by a violent mob.