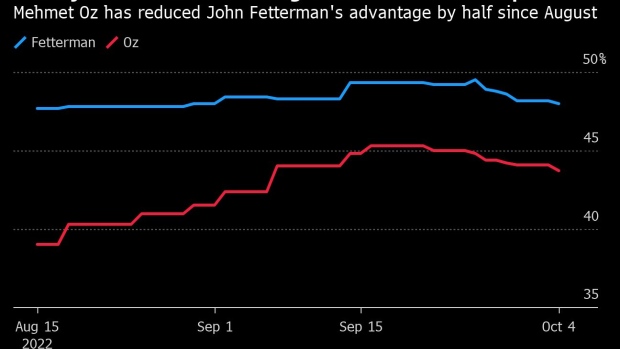 (Bloomberg) -- Support for Republican Mehmet Oz’s bid for US Senate from Pennsylvania has jumped, closing what was a 10-point gap in the race just three weeks ago to bring it within the margin of polling error.

Monmouth University found 43% of those polled supported Oz, up from 39% three weeks ago, while 48% said they would likely vote for John Fetterman in the November election.

The Pennsylvania Senate race is one of the most closely watched in the nation, as Democrats see it as one of their best chances to pick up the seat now held by Republican Pat Toomey to maintain their Senate majority.

Fetterman’s lead was as large as 12 points in the FiveThirtyEight average over the summer, when Oz was recovering from a grueling Republican primary and Fetterman was barraging his opponent with attacks that he really lived in New Jersey.

Fetterman enjoys a much better rating from voters as well, with 48% holding a favorable view of him and 44% unfavorable compared to 36% favorable and 53% unfavorable for Oz.

“Fetterman maintains an edge as his support is starting to solidify,” said Patrick Murray, director of the independent Monmouth University Polling Institute. “Oz’s higher negatives are driven in large part by the sense that that he is out of touch with most Pennsylvanians.”

But Murray also noted that Oz has a small advantage in voter motivation, with 86% of his supporters saying they will definitely vote for him compared to 82% for Fetterman. With the current 50-50 split in the Senate, each race is key to control of that chamber.

The Pennsylvania race has been particularly contentious. Fetterman accuses Oz, a famous TV doctor who has a residence in neighboring New Jersey, of having little connection to the state while Oz has been raising questions about Fetterman’s health and fitness to serve. Fetterman suffered a stroke in May.

The telephone poll of registered voters was conducted from Sept. 29 to Oct. 3 and has a margin of error of 4.8 percentage points.