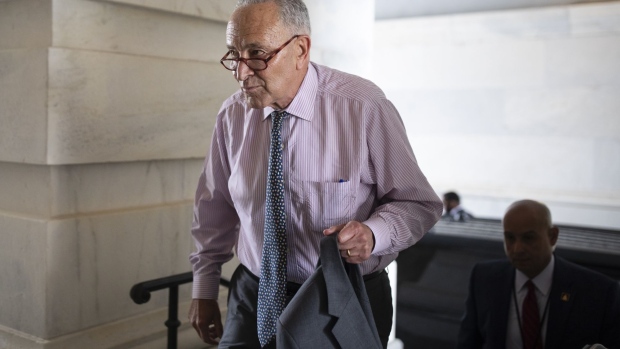 Senate Majority Leader Chuck Schumer, a Democrat from New York, arrives at the U.S. Capitol in Washington, D.C., U.S., on Wednesday, July 21, 2021. Senate Republicans are set to thwart the majority leaders attempt to speed President Bidens agenda through the chamber by blocking his bid to start Senate debate on a yet-unfinished infrastructure plan. , Bloomberg

(Bloomberg) -- Senate Republicans blocked debate on a vast and still unfinished infrastructure plan, rejecting Majority Leader Chuck Schumer’s drive to forge ahead while negotiators from both parties struggle to complete details of the $579 billion package.

The 49-51 vote fell well shy of the 60 needed to begin debate. Schumer switched his vote to “no” so he can call up the bill again.

Centrist Republicans involved in the negotiations said they need more time to hammer out the details. By early next week, they said, there should be enough votes to bring up the proposal.

“We have the number of Republicans necessary to succeed with the cloture vote on Monday or Tuesday,” GOP Senator Mitt Romney of Utah said Wednesday before the Senate action. He said “almost everything” has been resolved in the talks, which have bogged down in discussions of how to pay for the legislation.

Schumer’s decision to force the early test vote Wednesday afternoon spurred a faster pace in protracted talks, which began almost a month ago when a group of 22 senators involved in negotiations announced agreement with President Joe Biden on the general outlines of the plan.

Before the vote, Schumer argued the full Senate this year began its work on China competitiveness legislation and on a hate crimes measure while final text was still being ironed out.

“There’s no reason we can’t repeat that process here on infrastructure,” he said.

Minority Leader Mitch McConnell called the vote a “stunt” by Schumer. The Kentucky Republican added that Schumer can try again once he has 60 votes.

Negotiations between senators and White House officials will continue Wednesday.

A deal would mark a significant breakthrough in the drive for a massive infusion of money for roads, bridges and other critical projects like expanded broadband Internet service and improvements to power grids.

Still, any negotiated package faces significant hurdles in both chambers.

In the Senate, which is split 50-50 between both parties, the deal may not go far enough to gain support of all Democrats who have narrow control of the chamber, and it will need 60 votes to get past any filibuster by opponents. Just 11 GOP senators aided the negotiations and agreed on its framework.

In the House, where Democrats currently have a four-vote majority, it may be opposed by some progressive Democrats who want more infrastructure resources and assurances that a larger partisan economic will pass the Senate, and by some Republicans who say it spends too much.

Some Democrats in the House and Senate are growing impatient with the negotiations, and are advocating dropping the talks and adding the infrastructure package to a planned $3.5 trillion economic measure they could pass under Senate procedures without GOP support. But taking that route would be a blow to attempts by Schumer and Biden to show voters that Democrats can find some common ground with Republicans.

The bipartisan talks are led by GOP Senator Rob Portman of Ohio and Democratic Senator Kyrsten Sinema of Arizona.