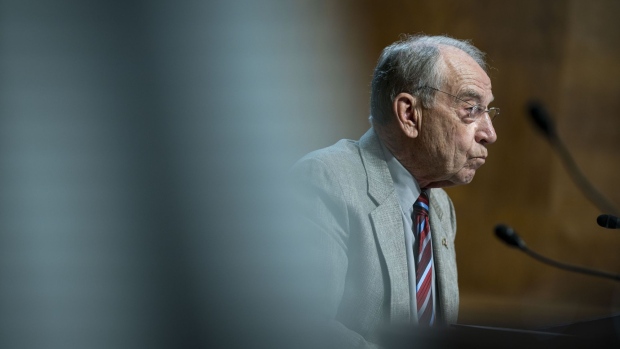 (Bloomberg) -- Iowa Republican Senator Chuck Grassley said he will seek an eighth term next year, a move that will be welcomed by Republican leaders hoping to retake the Senate majority next year.

“I’m running for re-election -- a lot more to do, for Iowa. We ask and will work for your support. Will you join us?,” tweeted Grassley, who at 88 is one of the oldest members of the Senate.

Grassley has been in political office since 1959 and in the Senate since 1981, most recently chairing the Finance and Judiciary Committees. He has an extensive resume of legislation to his name, including assorted tax cuts and criminal justice legislation.

He’s been a particularly fierce defender of Iowa farm and energy interests, notably ethanol mandates and wind power subsidies he wrote into law.

Four Senate Republicans have announced plans to retire — Richard Burr of North Carolina, Pat Toomey of Pennsylvania, Richard Shelby of Alabama and Rob Portman of Ohio. All but Alabama are likely to be hotly contested, as are the Arizona and Georgia Senate seats just won by Democrats Mark Kelly and Raphael Warnock that are subject to special elections. Republicans are also targeting Maggie Hassan in New Hampshire and Catherine Cortez Masto in Nevada, among others.

Grassley is a longtime ally of Senate Republican Leader Mitch McConnell, potentially shoring up his standing against repeated attacks by Trump, who blames McConnell in part for not joining his effort to overturn the election results on Jan. 6.

Grassley is a farmer who regularly runs miles in the early morning multiple times a week. Just last year he snapped a 27-year streak of not missing a vote after a positive COVID-19 test result. He is known for a gruff but friendly demeanor and has frequently worked with Democrats on bipartisan legislation. But he also can be a fierce partisan.

Grassley had a mixed relationship with Trump. He voted to acquit him in both impeachment trials, but at other times criticized his behavior.

Grassley also is known for holding meetings in all 99 of Iowa’s counties every year, a process that has become known as the “full Grassley.”