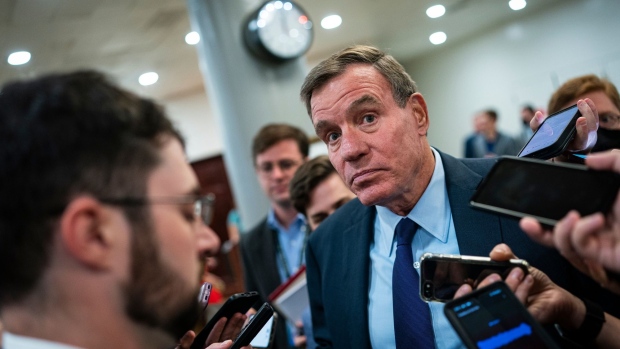 (Bloomberg) -- Senator Mark Warner of Virginia said Friday he’ll keep working with Senator Kyrsten Sinema of Arizona to narrow the carried-interest tax break, but sounded a cautious note on whether they could get it done.

Democrats had to strike a last-minute deal with Sinema, a key holdout of the party’s landmark tax and spending bill, to drop a plan to narrow a tax break for private equity to secure her support. Warner, however, said Democrats hope to address the loophole in another bill.

“She’s committed to work with me to see if we can do a meaningful reform on carried interest to make it fairer, to make it more transparent, to get rid of some of the abuse,” Warner said on Bloomberg Television’s “Balance of Power with David Westin.” “Can we get that done in time in a bill that would either go on a future reconciliation or get 60 votes? That’s going to be a big hill to climb but we’re going to give it our best.”

Time is running out for this Congress and Democrats may lose the House, the Senate or both in the November elections.

Warner, one of the wealthiest members of Congress, said he personally benefited from carried interest during his years as a venture capitalist. But, he added, there have been abuses of the tax break he hoped they could have curbed in the Democrats’ fast-moving bill.

Separately, Warner said he thought the proposed 1% stock buyback tax added to the bill makes sense. The buyback tax will replace revenue from carried interest and other tax changes made to secure Sinema’s support.

“I’ve been disappointed when companies have said, you know, ‘Lower our taxes and we’re going to invest more in plant and equipment,’ and instead they use it for stock buybacks,” he said.

Warner said he thought the buyback tax would take effect when the bill is signed, but he’s not sure. The text of that provision hasn’t been released.

Sinema’s spokeswoman, Hannah Hurley, said in a statement Friday that the Arizona Democrat was concerned that “disincentivizing investments in Arizona businesses would hurt Arizona’s economy and ability to create jobs.”