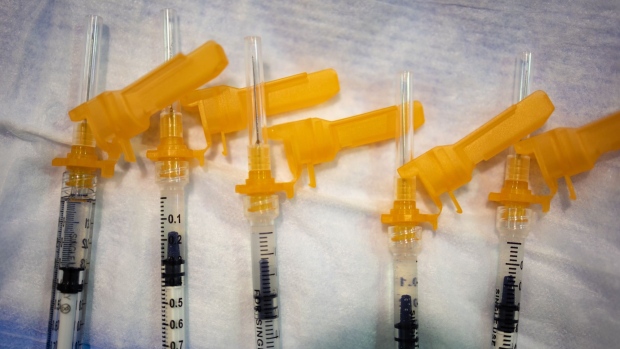 (Bloomberg) -- The U.S. Senate voted on Wednesday night to block President Joe Biden’s mandate for coronavirus vaccinations or testing for private sector workers in a mostly symbolic defeat for the administration but one that illustrates the nation’s political polarization over dealing with the pandemic.

Two Democrats representing states Biden lost last year -- Joe Manchin of West Virginia and Jon Tester of Montana -- joined all 50 Republicans to oppose the mandate, which has already been paused by the courts and is not yet being enforced.

The measure passed with a vote of 52 to 48 in the evenly divided chamber.

The Democratic-controlled House, however, is unlikely to take up the resolution of disapproval. In addition, the administration has indicated that Biden would veto any such measure, and there isn’t the two-thirds majority necessary to override him.

Under the mandate, workers at companies with 100 or more employees would have to be vaccinated against Covid-19 or take tests weekly. A federal court has halted the administration’s rule, while another federal court will hear a consolidated case against the mandate.

Manchin has said he supports the mandate for federal workers but not for the private sector, suggesting incentives instead. His state and Tester’s have been hit hard recently with Covid-19 deaths, and both badly lag the nation in vaccination rates.

Vaccine mandates have become a political flashpoint across the country, with Democratic states and cities either considering or enacting their own. Many states and counties won by former President Donald Trump, at the same time, continue to lag in vaccinations.

Republicans like Senate Minority Leader Mitch McConnell have urged people to get vaccinated but argued that a federal mandate risks making a labor shortage and supply chain problems worse. On Wednesday, McConnell said he’s strongly advocated for people to get inoculated, but would “proudly” vote to turn aside the employer mandate because it’s a significant overreach.

“The federal government elites in Washington cannot micromanage citizens’ personal choices without a legitimate basis in law and the Constitution,” he said. “And that goes double for presidents going far beyond the bounds of their office and their authority.”

Senate Majority Leader Chuck Schumer said it was shameful that Republicans would try to block the employer mandate at the same time experts say booster shots could help ward off the new omicron variant that appears to spread rapidly. The GOP is eschewing scientific advances that are the best chance of bringing the pandemic to an end, he said.

“Some of the anti-vaxxers here in this chamber remind me of what happened 400 years ago when people were clinging to the fact that the sun revolved around the Earth,” he said on the Senate floor. “They just didn’t believe science.”

But GOP senators leading the drive to overturn the mandate said they see vaccine resistance hardening in the face of the administration’s tough directive.

“The mandate is going to backfire,” said Senator Roger Marshall of Kansas.